Noble by Name, Majestic by Nature


The literary world is agog this evening at rumours that its greatest exponent, William Shakespeare, may be coming out of retirement in response to the developing nonsense around Mark Noble’s stalled contract negotiations at West Ham. Willie, who has been in hiding for years with Jimi Hendrix and Jim Morrison (and for some unclear reason, Richie Edwards of the Manic Street Preachers) has expressed a desire to chronicle the treacherous goings on down at the Boleyn. It is reported that Noble has become an increasingly tragic figure, bewildered by the lack of recognition of his intense loyalty, forcing him to consider forsaking his beloved Hammers for the likes of Stoke, QPR, Wigan and a host of other pointless premiership pretenders.
Speaking from an Island off Madagascar, The Bard revealed “I liketh not these clouds that gather across the firmament, for they bestoweth great peril and force sane men to wander, until it doth maketh them mad and without reason”. Paul Raisenthorpe-Smythe, presenter of Channel Four's late night literary magazine ‘Books and bits’ ventured ‘this could be the tragedy of all tragedies, the final literary piece for William, and also a useful springboard to relaunch his failing career’. He was also quick to emphasise that late night arts programmes are not solely the reserve of literary trolls and their sycophantic gargoyles.

Other observers have expressed fears that Noble may disappear into the same Bermuda (transfer) triangle that previously engulfed Hammers stars Bobby Zamora and James Collins, both of whom experienced mysterious and inexplicable disappearances. Frustratingly, recent returnees have been unable to recall much about their time 'missing'. Speaking for the first time on the matter, George McCartney said – “ I can remember very little, except that it felt empty and purposeless”. Similarly, the prodigal James Collins spoke of his time ‘lost’ “Although the colours seemed familiar, everything seemed without soul and i couldn't decipher a word of what they were saying, it was nightmarish”
Z: still out there in the Caribbean

Meanwhile, more impressionable hammers fans will be buoyed by David 'Yoda' Sullivan's  daily press ‘leak’ where he lauded young Mark’s contribution "strong the force with him, it is" 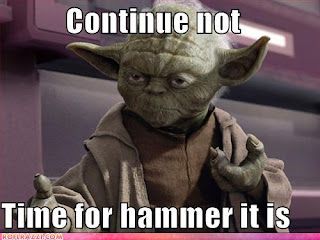 
Finally, in other news, Michael Stipe has announced plans to reheat moribund nineties popsters REM for a typically self-indulgent and indecipherable concept album exploring his personal catharsis around the whole debacle. A provisional album title "Am I...?" has been mooted.