In disappointing scenes this morning outside his new club’s ground at White Hart lane, Clint ‘the enforcer’ Dempsey lashed out at his former employers at Fulham; “I couldn’t stand another minute at the club, that awful team kit was just wrecking my buzz, dude”. In worrying developments ahead of their crunch tie against the erudite Hammers, Dempsey identified a problem that has been eating into the very core of Fulham “Man - I was sick of being called a 'cottager', it sounds so poncey, like being from some rural retirement home for has-been artisans and second-rate street performers”.


Fulham are likely to face an uphill battle to find a replacement for the mutinous Yank as they struggled to recruit new players during the transfer window because their home kit is deemed totally naff by toady’s fashion-conscious footie superstars. Meanwhile, the elegant Eastenders of west ham will almost certainly rub salt into their opponents wounds today by togging out in their bodacious home claret and blue ensemble. New recruit Andy ‘ASBO’ Carroll identified the club’s kit as a major selling point that convinced him to accept the paltry £80,000 a week remuneration offered by the cash-happy Hammers. It is even rumoured that Andy insists on wearing the team jersey home to relax watching his Steven Seagal DVD collection.

Elsewhere, after his regular Saturday morning massage, team manager Sam Allardyce expressed his delight at capturing the striker and vowed that the Fulham goal would be totally under siege during today’s encounter. 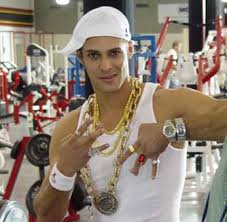 
Meanwhile, Fulham sources have insisted that the club has ditched their previous fuddy-duddy thatched cottage image for a new terrifying urban-chic ethos. As testimony to their new-found city chic, the streetsmart Fulham team are planning to travel across London today on a fleet of specially hired segways. Moreover, Rap-friendly Cottager Crew boss, Brede Hangeland threatened on twatter “Our homies iz gonna du a job on dem, rite on der oan mannor, innit…”.

Sources at West ham could not confirm whether they could guarantee the security of the Segways during the match and suggested that the Fulham team might like to reserve taxis in order to ensure smooth passage home after today’s visit to trendy East London.