Five things we can take from Hammers win in Anderlecht 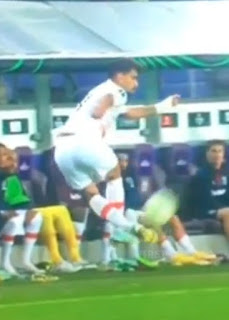 West ham took full control of their Europa conference last night with a classy win against a feisty Anderlecht side. David Moyes will be delighted with the 1-0 win which highlighted many positives about the current squad at his disposal. Here are five thoughts to cheer Hammers fans;

1. This is a quality squad - starting with almost his b-side, Moyes was still able to field a side brimming with talent and experience that was as good as most starting line ups we have had over the past 20 years!  Being able to leave Rice, Soucek, Scamacca, Paqueta, Zouma, Kehrer, Cresswell, Fabianski and Fornals on the bench says it all. Despite all the absences, the Hammers played with fluency and largely dominated a decent Anderlecht side on their own turf. The arrival of Rice, Paqueta and Scamacca inevitably tilted the game towards the Hammers and the 1-0 win was well deserved. Moysie certainly has plenty of options right now.

2. Flynn Downes is a fantastic addition to the squad. Calm on the ball, great positioning sense and an eye for a gap, he adds fluency to the midfield. He doesn't have the physical presence of Tomas Soucek but brings plenty of quality to the side in every other department. The one remaining unknown is whether he has a decent shot in him? Either way, he has been a great acquisition and will inevitably play an increasingly important role in the side as the season progresses.

3. Paqueta has that creative ingredient that has been missing at the club in recent years. He is understandably taking time to settle in, but sees things others are oblivious to and is no wilting violet in the physical stakes. His through ball for Scamacca's goal was classy while the take down with his back foot was audacious! He looks a big step up from Lanzini and once he gets a few goals will surely start to have a major influence on games.

4. Scamacca is the hitman we have yearned for since Arnie departed. A big physical presence, neat on the ball, hungry in action and, most importantly, he shoots on sight with great precision. The thought of pairing him up front with Antonio when we want to terrorise opposition is a mouthwatering prospect!

5. Areola is ready to push Fabianski for the starting berth. Last night highlighted how European action can exercise a squad that has true depth - this is our first time to approach European action without the fear of exhausting our squad and it keeps our fringe players active and happy. Areola's save at the end was superb but also, his distribution from kick outs is precise.

Happy days - we are firmly in control of our European journey and now it's time to translate all this potential into Premiership points!