Outrage at scenes from West ham! 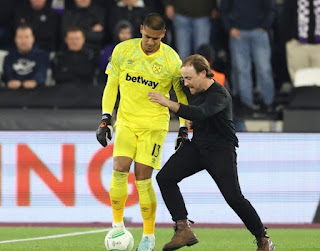 As West ham eased their way into the last 16 of the Europa Conference thingy, fans joy turned to outrage as Anderlecht fans chose to ruin the night for everyone.

With West ham cruising at 2-0, Alphonse Areola stepped up to take a free kick from deep in the Hammers half. Suddenly, a very Belgian-looking ruffian stole onto the pitch and attempted to rob the ball from the Hammers stopper!

Areola may have a mere one-star rating for ball skills on FIFA but he responded calmly with a simple pull back that left the invader on his behind and, no doubt, feeling like the utter idiot that he is.

Responding afterwards, our top sports psychobabblologist - Dr Hansi von Fleishbanger- captured the ire of fans as he noted "pitch invasion without at least 50% nudity is a disgusting insult to the legends of streaking from the 70s and 80s - these idiots of the modern game couldn't tie the bootlaces of the likes of Mark Roberts, Michael O'Brien and Erica Roe"

Von Fleishmuncher duly elaborated "these pretenders need to complete extensive training before taking on these these responsibilities, quite frankly, a simple Youtube search can clarify the three key ingredients of a proper pitch incursion - nudity, nakedness and no clothes-ness"

In other news, Jarrod Bowen is bloody brilliant and Flynn Downes looks set to nail down a well deserved starting place in the midfield.