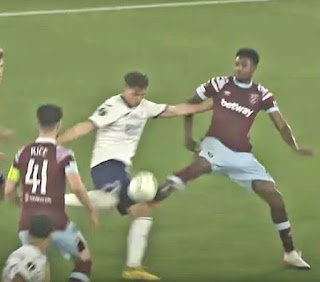 Until recently (last weekend to be precise) many Hammers fans would have celebrated the retirement of VAR. After a series of harsh VAR calls in recent seasons, the belief had formed that the technology was stacked against the Irons.

But last weekend's tussle with Fulham certainly changed all of that as the Hammers benefitted from three dodgy decisions to gain three valuable points that have got their season back on track!

Wind forward to the VAR-less Europa conference and suddenly West ham were looking for a video review as Ben Johnson appealed the refs decision to (incorrectly) award a penalty by signalling the need to look at the tackle on screen.

Sadly there was no screen to look at and the Hammers had to endure a tricky 6 minutes of injury time as Anderlecht were gifted the chance to steal a draw in a game where they had been hopelessly outclassed.

Images clearly indicate that Johnson was hard done by as he pinched the ball and was kicked by the Anderlecht forward.

Alphonse Areola did his best but couldn't provide justice with a save. The keeper had pulled off a fabulous save from a curling Esposito effort midway in the second half which ultimately proved crucial to the unneccessarily narrow 2-1 win.

Areola had another good night, again demonstrating his excellent distribution skills as the Hammers opted to play out from the back as they did not have any of their big target men up front for most of the game.

Either way, it was a job well done and the Hammers march on to the last 16.

A week is a long time in politics, and the pro-VAR vote has surely risen substantially amongst the Hammers faithful!