The Gods of Karma Come aKnockin for Virgil Van Cheat 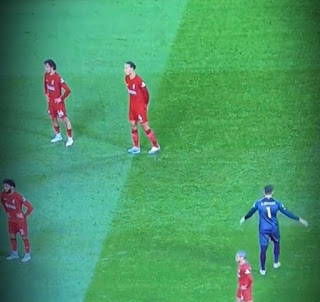 Aharrrrrrgh. Hammers fans have been seething all week after footage emerged of Liverpool 'ace' Vigil Van Dyck tampering with the penalty spot priot to Jarrod Bowen's penalty at Anfield.

Bowen struck a decent spot kick but his shot lacked height and allowed a well judged leap by Alisson to push it away. A save that ultimately robbed the brave Irons of a deserved point.

If the ball hadn't been embedded in Virgils manufactured dike it would have likely sailed over Alisson's flailing arms. If this was cricket Virgil would get a few months ban for ball tampering.

Virgil and Co. Thought they had gotten away with it and in usual Scouselogic justified his skullduggery as the behaviour of a winner.

But the Gods of Football were not impressed and have taken decisive action. Liverpool travelled to Notts Forest expecting to continue their recent string of good results but were served a sickening dose of justice as Forest stunned them with a 1-0 win!

Even better, Van Dyck inexplicably fumbled two gilt edge chances to get Liverpool back into the game and even when gifted a third opportunity the Forest keeper pulled off a super save!

We can expect the Hammers to get more than their share of luck against Bournemouth on Monday night as the big wheel of fortune keeps turning.