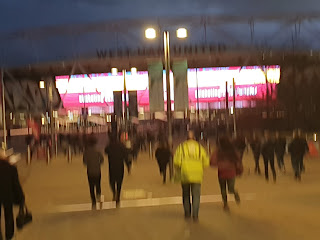 It was a tough night at the London Stadium, made all the more difficult by a referee who lacked competence and seemed to repeatedly favour visiting Lyon such that David Moyes refused to comment in any way on the referee's performance! That said, it was a gutsy performance from the Hammers having been reduced to ten men by some sly gamesmanship from Dembele that hoodwinked a jumpy referee into a harsh red card decision. Off Cresswell went after the slightest of touches (not even a tug) brought Dembele tumbling outside the box. The referee decided that Dembele was through on goal (more like on his way out to the corner flag!) and still with the formidable Zouma to beat, but the referee saw it differently and Dembele and Co rejoiced, even treating the media to a crafty wink after the incident.

But Moyes boys are hardy troops and out they came for the somecond half and resolutely defended against a buoyant Lyon. Then, against the run of play, Jarrod Bowen conjured a goal! The place erupted!!! Sadly, the Hammers couldn't quite hold on as Spurs loanee NDombele grabbed an equaliser with 20 minutes to go. The Hammers almost scored a second as Antonio somehow missed the ball (and the keepers head!) With the goal at his mercy after more good work from Bowen. Lyon huffed and puffed but it stayed at 1-1 to set up an intriguing second leg next Thursday.

Hammers may appeal the red card.

Special mention to the pitch invaders - if you are going to run onto the pitch at least get your togs off as without nakedness it's dull and uninspiring idiocy. Proper streakers condemn your paltry efforts. Also, DO NOT do it ( and stop the game) when West ham look like they are about to score - that deserves life ban you bozo :-(

Areola: looked sharp and had to stay focused as Lyon pushed us hard in the second half. Might have done better for the goal but decent stuff. 7/10

Fredericks: Had a good game defensively but he lacks the precision needed to add to the attack and does not create a big platform for Bowen to exploit down the right. 7/10

Cresswell: Harsh sending off for which you cant really blame him. Quiet night before that as the teams spent most of the first half feeling eachother out. 6/10

Zouma: Superb stuff in defence. He really is a rock and dug in with Dawson to kill Lyon's efforts in the second half. Always in the way! 8/10.

Dawson: Tremendous performance defensively snd his long passing is at times sensational - with the ball to Benrahma in the first half Pirlo-esque in precision. 8.5/10.

Rice: Not quite his usual massive presence as Lyon were adept in midfield and we were on the back foot in the second half. Avoided getting a second yellow so he can horse into the Lyon players next week - and you know that he will! 7/10

Soucek: As always, he glides around breaking things up and keeping the opposition at arms length. He is missing Coufal with whom he has a telepathic understanding. 7.5/10

Benrahma: So much potential but he is still struggling for end product - which is the reason he was subbed when we went down to ten men to allow a new left back to come on. That said, he almost changed the game when he was unlucky to see a shot come back off the inside of the post midway through the first half. I can see him getting us a penalty in Lyon! 6/10

Bowen: What a player! He has evolved from the keen kid who frequently lost possession, to a crafty customer who mskes the opposition tremble whenever he gets the ball. More of it last night  including a morale boosting goal from almost nothing just when we needed it. Almost set up Antonio for a second as well with a precise pass. 9/10

Fornals: He has been in good form of late and was again intelligent in both defensive and attacking duties, contributing importantly to Bowen's precious strike! 8/10

Antonio: Led the line well and kept us in the game as an attacking threat when we could have been overwhelmed by Lyon with their extra man (or even two given the refs performance). Maybe should have walloped a winner when put through by Bowen in the last quarter but once again he worked his socks off. 8/10

Subs: Once again Moyes was very conservative with subs - surprisingly so given the importance of fresh legs when a team down to ten men has to chase the ball. Johnson performed well at left back in the second half.

They say football evens out over games - if so, the Hammers have every chance of succeeding next week in what will be a massive challenge. Playing a counter attacking style may suit Moyes as the pressure will be on Lyon to make things happen…and hopefully without an extra man next week. Cresswell's absence will be a sore loss but this team has guts!

P.S. For anyone following VWH's transport woes getting to the game, YES we made it just on time!