Just How Good are Eintracht Frankfurt? 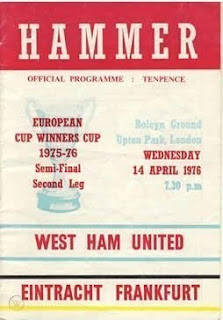 No German side has ever won the Europa League but with RB Leipzig and Eintracht Frankfurt both in the semi finals this year that may change. For Frankfurt, this is their second Europa semi-final in three years, having taken Chelsea to a penalty shootout in 2018-19.

The term 'Eintracht' is equivalent to United in English with the club nicknamed the 'Eagles'. Frankfurt lie in 10th in the Bundesliga after an inconsistent campaign, and are thus well off the pace needed (7 points at present) to qualify for Europe next year and will see the Europa League as their best means of returning to European action next year. But in addition to their gutsy performances in overcoming Barca, they have beaten Bayern Munich this year and drawn in their two games with potential final opponents RB Leipzig.

More recently, Hammers and Frankfurt fans clashed earlier in the competition as the Hammers took on Sevilla and Frankfurt played Real Betiswho also play in Seville. The Eagles have a passionate fan base underlined by the 30,000 who somehow wangled their way into the Nou Camp for Thursday night's famous win over Barcelona - who had been unbeaten in their previous 16 matches!

Central to that victory was the wizardry of Filip Kostic, who scored a brace, and Colombian striker, Rafael Borre, who netted a stunning second goal on the night. In addition, Martin Hinteregger provides the defensive rock from which the team build. While Kostic creates from the left wing, 22 year old Danish star Jesper Lindstrom is a potent force down the right. The Hammers will be hoping that both Cresswell and Coufal are available for the games to suffocate Frankfurt's wide threat.

Frankfurt are a tall side and potent from set pieces where, just like West ham, they have amassed 12 goals this season to date. They have conceded one less from set pieces with 6 to West Ham's 7 goals. The Hammers have a better scoring rate at 1.6 goals per game versus Frankfurt's 1.4. All told, the teams look closely matched.

Eintracht Frankfurt and West Ham previously met in the 1976 Cup Winners cup semi-final. West ham progressing to the final after a hard fought battle over two legs where a cracking Graham Paddon goal in Frankfurt kept them in the tie with a 2-1 loss before a brace from Trevor Brooking (one a well taken header!) and a Keith Robson thunderbolt gave the Upton Park faithful a night to remember with a 3-1 win in the second leg.

We can expect a similarly close fought battle when the teams square up in ten days time!