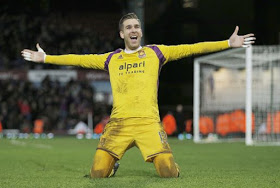 There was major drama in the Europa League final last night as Villareal took the trophy after extra-time and a prolonged penalty shoot out. After all 10 outfield players successfully converted their spot kicks, it cam down to pistols at dawn between the goalkeepers with Man Utd's David De Gea fluffing his kick to hand the trophy to Villareal!

All of which brought back fond memories for Hammers fans of the night in January 2015 when under similar circumstances Adrian thumped home the winning penalty in a shoot out that ended 9-8 as the Hammers overcame the sticky Toffees of Everton. 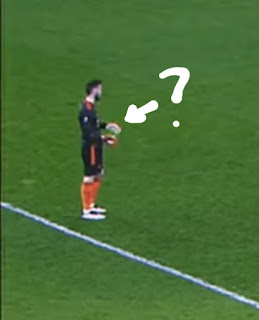 Comparing techniques, it is immediately evident that De Gea made a crucial error in takibg his kick - while Adrian took a long run up during which he jettisoned his gloves in a symbolic gesture of transition from netminder to outfield player, in contrast De Gea kept his gloves firmly on as he took the kick!!!

The message is clear - don't think like a keeper when you are the penalty taker.

Meanwhile, hearty congratulations to 'little' Villareal who have shown that a club from a town of just 50,000 inhabitants can seize Europe's second most coveted trophy - should be easy for the East London giants next year!