It's a running joke amongst West Ham fans that Mark Lawrenson nearly always gets it wrong with his predictions regarding the Hammers. At this stage most fans heave a sigh of relief when he predicts a West Ham defeat as he clearly does not wear Claret-tinted glasses!

And so as we face the final game of the season a table has emerged detailing the table as predicted by Not Nostradamus Lawro. And guess what - the club where he is least accurate just happens to be the Hammers! 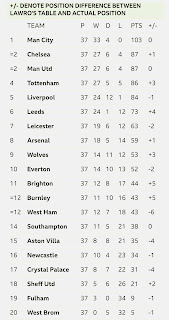 In fairness, he has placed most clubs within a few places of their actual league position, but with the Hammers he is a whopping 19 points and six places out as he has persisted with negative predictions week in and week out despite the scintillating form of what is a well balanced side!

Strangely, the other two clubs that he has struggled to predict accurately are also in Claret n Blue - Burnley and Villa!

Worryingly, Lawro thinks the Hammers will win on Sunday!