Julien's Faux pas #17: The ghosts of January's Transfer Window Are Back to Haunt the Hammers 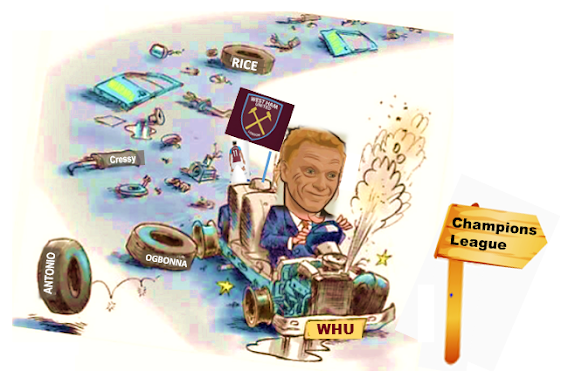 The craziness continues as with just seven games to go the Hammers are still well in contention for a Campion's League place and (mathematically) could still win the league outright! With wins away to Wolves and at home to Leicester, David Moyes men simply won't give in to the doubters and continue to defy all expert prediction.

However, in the background things are turning against the Hammers as injuries to Declan Rice, Michail Antonio and now Aaron Cresswell threaten to expose the lack of ambition the club had during the January transfer window wen it was pretty obvious that we needed back up in terms of a striker and in central midfield in case of injury.

Instead we sold an above average striker in Seb Haller without replacing him and failed to prepare for Rice or Soucek succumbing to injury. Now it's truly down to the bare bones as Sunday's subs bench demonstrated.

That said, Moyes' men stick together and can play in a variety of formations to get the best possible result from what is available. We hunt as a pack and defend like our lives depend upon it - anything is possible with such good team spirit. With seven games to go, the visits of Chelsea and Everton are key but in all likelihood 20 wins will seal 4th position - that's 4 wins from the remaining 7 games, 5 of which are against sides struggling in the relegation battle.

The bookies have us the least likely of Liverpool (4/5), Chelsea (5/6) and Leicester (5/6) to finish in the top four at 9/4 against but we have defied to odds again and again this season so who knows....and it's been reported today that the players will get an average 350K bonus each if the Hammers make it to Champion's league - but i doubt if anybody thinks they need a financial incentive as the squad really is full of love right now.