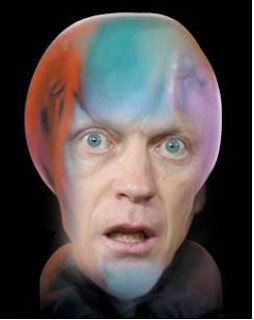 For those of a certain vintage there is a scene from the end of the original Star Trek that sits in the memory, appearing in night terrors as the face of torment that transcends the galaxies.

And so it was for David Moyes yesterday as the Happy Hammers made the long trip up to St James' Park for a potential banana skin against the toon, with Steve Bruce's relegation-threatened troops buoyed by a recent win and the return of Alain Saint-Maximin and Hammers-tormentor, Callum Wilson.

Who knows what happy gas was circulating in the team bus but for no apparent reason Moyes men decided to don the circus masks and put on a stunning display of acrobatic self destruction picking up a needless sending off for Craig Dawson followed by two hilarious own goal stunts.

Technically, Newcastle's second goal was not an OG but in all fairness if Joelinton hadn't poked the ball home from two feet no doubt one of our defenders would have obliged instead!

And then, just when logical fans (err, do they actually exist?) were writing the game off as a lost cause - two goals behind, down to ten men and playing with a depleted side, the Hammers kicked into gear, made it to half time and regrouped.

Oggy looked more comfortable back in his standard CB position while Coufal just kept haggling away and Bowen was like a wasp buzzing about. Diop made amends for his earlier blunder and then the error-prone Ciaran Clarke gave away a needless penalty with a bizarre hand ball. Lingardinho slotted the penalty and with ten minutes left we looked the more likely to push on.

Then disaster struck as Oggy got muscled off the ball and Newcastle sub Willock headed home for the winner.

No point for Moyes men, but lots to ponder as we are leaking goals like never before this season. Next week's game against Chelsea is even more crucial now.

It's the younger Hammers fans i feel sorry for, as us veterans are long-since hardened to this sort of circus behaviour.