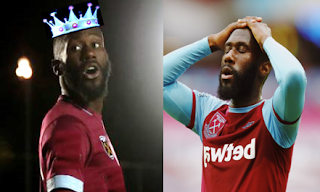 As the Hammers continue their quest for Champion's League football next season they are facing a tough time with injuries depleting an already thin squad. With Declan Rice and Michail Antonio sidelined for at least a few weeks, David Moyes men dug deep to overcome fellow high flyers Leicester at the weekend in a 3-2 thriller.

One major positive on the injury front has been the return of Arthur Masuaku to his left sided berth where he slips into a back five formation that allows him to push forward while helping out at left back. This is a system that was very effective for the Hammers up to him being sidelined for surgery in December and has again worked as since his return the Hammers have picked up vital wins at Wolves and then at home to Leicester at the weekend.

However, not all fans are pleased to see Arthur return with some referring to him as a 'liability' while a more objective analysis indicates that he conceded possession 11 times during the game, including needlessly losing the ball in the run up to Leicester's opener that sparked a nervy-tingling comeback!

That said, many other fans hold Arthur in high regard as he is skillful, cheeky, brave and passionate. He struggled at times with focus when asked to play at left back earlier in his career but David Moyes recognised his value as a left sided midfielder come defender and he became a revelation once positioned further forward.

Moreover, during Sunday's game Arthur was instrumental in West Ham's best play - first whipping in a tantalising cross that Jarrod Bowen almost netted (before painfully crashing into the goalposts) before then sending a similar cross in that caused the chaos in the Leicester box that opened things up for Lingard's classy opening goal. Then at the start of the second half he nicked possession as Leicester attempted some defensive tippy-tappy which initiated the sequence that led up to Bowen's crucial goal.

add to that another second half cameo where he rounded three Leicester players in a move that had the trickery of his famous move against Spurs a few season's back.

But then there was the error that cost Leicester's first goal. For sure, Arthur got robbed but frankly the CBs should have done better against Ikeanacho and unusually Fabianski flapped as the well hit shot went right through him. Not a good moment for Arthur or the rest of our defence!

That said, what about the bigger picture? Arthur has great pace that is vital when opposition sides break against us. This allows us to throw players up for set pieces, which as we know with Soucek, Dawson et al is a real source of goals. He also provides excellent cover for Cresswell - would Arsenal have gotten three goals against us all from the left flank if Arthur was back for that game?

He also holds possession when others would lamp the ball forwards as he has a fantastic pair of pins - neck and neck with Benrahma for the best close control in the squad.

He is also classic West ham - naughty, amusing, unpredictable and determined to play ball. The foundation of our success this year has been our courage to take chances going forwards - no settling for possession-keeping sidewards passing, when we see an opening we go for it - probably because we know we can defend well if we lose possession. In modern footy you have to take chances on the break as sides are too organised if you give them time to get set up. Turnover ball is key. That's why Bowen, Benrahma, Masuaku and even Lingard lose possession a lot. It's also why we consistently carve teams open on the break when things click.

David Moyes is recognised for his ability to organise a team defensively with committed and disciplined teamwork. Less appreciated is his awareness of how to frustrate opposition teams and create decent scoring chances despite conceding the Lion's share of possession - a ploy that requires courage and risk taking. When he returned for his second spell we expected hard work and endeavour - having succeeded in setting up his defence he has now added craft and guile in attack. Ask fans of other clubs if they like to watch West Ham games for entertainment and exciting football - right now every game is toe to toe which is stressful but definitely not boring!

There will always be room for entertainers at West ham and any fans who can't live with that need to catch themselves on. Arthur is nicknamed King dribbler for his ballet-like skills....Long live the king!