Believe it or not – the Hammers have found the striking talent that they need!!!

Mercifully, as the last few hours of the transfer window slip by, word from around Upton park is that the cash-strapped and striker-deficient Hammers have managed to find just what they need to act as back up to Andy Carroll, and considerably more besides! 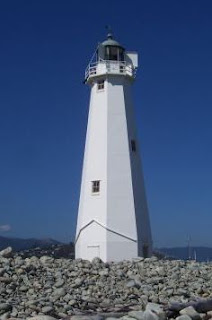 1. John Kidson – best known for his role as the lone keeper of Nelson Boulder lighthouse for 27 years could. Like fellow Kiwi countryman Winston Reid, do a fantastic job for Big Sam – and he is unusually experienced at coping with the extreme isolation that the one man up front system imposes upon any would be striker. Given that John has been officially dead since 1892, he would be unlikely to command a major transfer fee or indeed add substantially to the club’s “collosal” wage bill. 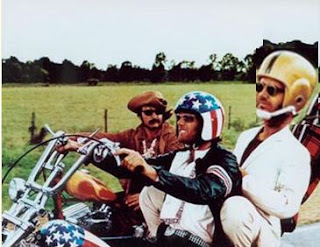 2. Jack Nicholson – The ‘cheeky’ Hollywood veteran is reported to have a keen interest in footie and more importantly, as demonstrated in this shot from Easy Rider, has a head that is sufficiently large for even profligate Matt Jarvis to locate with one of his crosses.  However, Hammers fans should not hold their breath as the top earning star’s outrageous wage demands are likely to pose an obstacle to a last minute transfer. 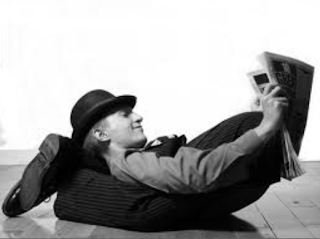 3. Richard Rosson (AKA Rubber Richie) is a veteran contortionist seen here in his unique  ‘offside deceiver’ pose. Richard has been tempted out of retirement by the realisation that modern footie is an athletic freak show and that this unusual pose defies the offside rule as it currently exists because his feet are not in an offside position! Just how he might contribute to the Hammers goal haul with such a position is less clear but as they say “possession is nine tenths of a score” 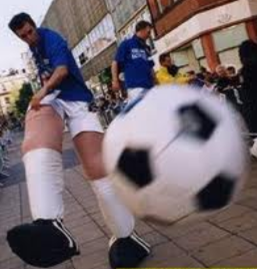 4. Adam Sinden is known to the world of stilt athletics as the fastest man alive having completed the 100m in 14.3 seconds averaging a sensational 29KPH! Experts have reassured the Hammers boss that with minimal training Aussie-based Adam could be coached to fit in with the complex Allardyce system and thus add some crucial extra height to the side for those oh-so-vital setpieces from which the current Hammers squad score the majority of their goals. 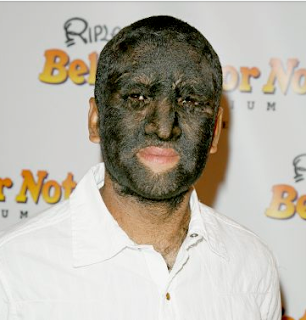 5. The Hammers abysmal away form has been reckoned to stem from their inability to cope with the inclement (and sometimes frankly harsh) conditions at venues located  ‘up North’ . Their dreadful away records at the miserable rain sodden hell holes of Goodison Park and Anfield testify to such a theory. One new signing who would be ideally equipped to deal not only with the pishy climate, but also the cocky locals would be Larry Ramos Gomez who, by virtue of his hypertrichosis, is one of only 100 people worldwide who are covered from head to toe in a cosy coat of hair. Larry is of course not to be confused with Edu Ramos Gomez who is merely a midfielder with Villareal in the Spanish league – and nothing like what our Sam is seeking!

6. Carlton Cole. Although there is nothing particularly exceptional about ‘our’ Carlton, his freakish loyalty to the Hammers during our relegation year out, willingness to accept modest remuneration for his services, and all round feelgood-decent bloke-ishness could provide the striking solution that the Bubbles men need – it’s not as if he hasn’t been there to deliver at crucial times in the past?
Posted by Verywestham at 14:43