Grrrrr. With 8 minutes of normal time to play the Hammers looked like they were going to finally pull one over on the Toffees – a team that they have found more than a little sticky to beat over the years.

Then suddenly Satan-Leighton stepped up with a Devilish free kick – his second of the day, and Jussi was left helpless as it bounced off the inside of the post and in. Sources close to the Boleyn ground have cautiously suggested that the pin-point accuracy may have been facilitated by the use of magnet forces – just like those suggested by  Jessie of Breaking bad fame.


Moreover, Only a matter of seconds after clinically dispensing another penalty kisk to give the Hammers a sight of vistory at 2-1, Mark Noble was dismissed for what in all honesty was a rash challenge and despite Big Sam’s protestations, left him at major risk of a second yellow and off he went. 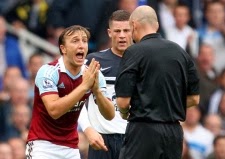 And so it was, the ten men couldn’t close it down – hardly surprising given that the second half stats indicated 70% possession for Everton before the sending off. Fair dues to Joey O’Brien who cannot be faulted for trying to prevent Lukaku from scoring (and certainly made him earn the goal!), but a sickening 3-2 result ensued. The main positives were another Ravel Morrsion goal and a decent debut for Mladen Petric.
Posted by Verywestham at 12:32