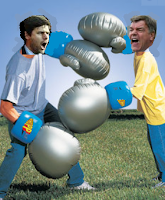 ZZzzzz....Yes indeed, mission accomplished for the Hammers at St Mary's where they left with a useful point and almost stole all three in the closing minutes as 'Ginge' ballooned the ball over the bar from six yards out!

A dull stalemate offered little by way of opportunities except to remind that Jussi's reflexes remain fully intact even though he is now knocking on forty years of age. He accepted the man of the match award with an apparent sense of bemusement whilst defending his sides attacking impotence by suggesting that they had created good chances. Hmmmm....is there any limit to his abilities - Pinocchio as well it seems!

And so it's Everton at the Boleyn next week - hard to see a goal rush there either but at least it's some more time for new signing Mladen Petric to catch up in match fitness. Maybe even Carlton Cole can make a 'surprise' return by proving his fitness.