The FA are once again under fire after disgraceful scenes last night at Loftus Road where the peacekeeping force of Mark Clattenburg and his assistants were barely able to maintain control of what became a 'warzone'. Clattenburg was forced to go on a Judge Dredd-like retribution spree, booking a new Premiership record of eight Hammers players, including Momo Diame for wearing his boots too tight and Mark Noble for kicking the ball dangerously hard.

As Clattenburg lost control, he cautioned Hammers reject Rob Green for smirking at Julio Cesar’s comical efforts to keep out West Ham’s decisive second goal. However, West Ham are likely to appeal goalie Jussi Jaaskelainen's caution which was listed in the referee's report for being "deliberately Norwegian" which seemed a tad harsh given that he hails from Finland.


In ugly scenes outside the ground, 'Clatters', as he is known by his fellow whistleblowers, attempted to perform a citizen’s arrest on Hammers chief crimelord  Sam Allardyce and was later observed chasing after the Hammers team bus in his self-styled panda car in an attempt to caution the driver for failing to indicate properly upon exiting the Loftus Road carpark. 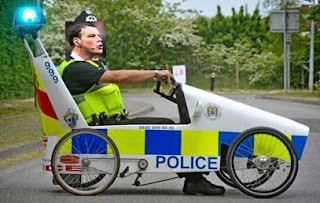 
Clattenburg, the proud owner of Britain’s largest Dad’s army DVD collection, is no stranger to controversy having had a whopping 11 applications to join the territorial army rejected. Moreover, he was previously described as a ‘liability’ by fellow members of his local neighbourhood watch due to excessive use of restraint against pensioners. Speaking at the launch of his new ‘Clattenberg Collection’ of law and order themed t-shirts he sighed “Thankfully, my family were not exposed to the carnage of last nights game due to the 8PM domestic curfew that I have imposed. After that time I only permit movement aided by the use of infra-red night goggles” 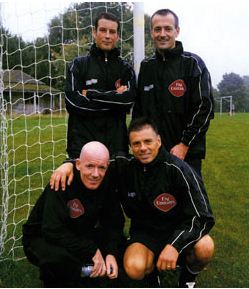 Meanwhile, easily disappointed QPR boss Mark Hughes revealed “Frankly, I was disappointed – at least 3 of their starting 11 didn’t get a caution even though they were clearly accessories to the battering my lads got. It’s disgusting when that kind of wanton domination goes unpunished by the FA”. 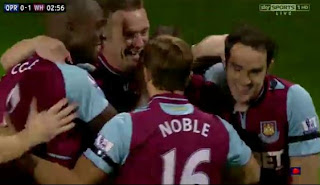 Criminal mastermind, Sam Allardyce, was unrepentent - my lads aren’t interested in all that poncey fair play points stuff  -  that nonsense only gets you relegated – look at Blackpool! - and lets face it, the Europa league is for sissies and impoverished eurozone wannabe nations. We don't want to creep into Europe through any back door system - it's the full front door entrance or nought for us. 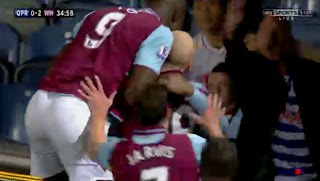 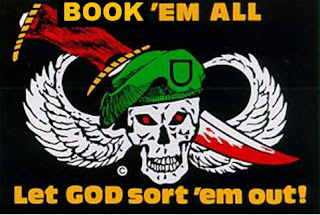 Another Classic Clattenburg Tee
Posted by Verywestham at 12:45