Travelling Hammers fans have been warned to bring their X-rated sunglasses for this weekend’s visit to Wigan as senior first teamers have vowed to avenge Wigan’s wicked treatment of the Hammers reserve team in the recent Capital One Cup encounter. 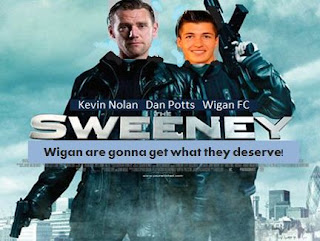 Captain Fantastic, Kevin Nolan, was said to have been incandescent with rage after the beating that Wigan dished out to the young Hammers reserve team that turned out for the recent Capital One Cup clash at Upton Park. Young Rob Hall locked himself in the toilets for an hour afterwards while poor little Dan Potts was off his food for two days.

Speaking as the Hammers boarded their new club jet, Nolan warned: “If you’re gonna go around beating up someone’s little brother then you are gonna come unstuck when big Bro catches up with you”. As part of a campaign of terror, the Hammers have vowed to cause as much wanton destruction as possible during their visit today.
The list of possible terror tactics includes:
Refusing to give the ball back for throw ins
Arguing endlessly about offsides (Carlton Cole will take a lead in this matter)
Raiding the Wigan trophy cabinet (errr maybe just deface the empty shelf with ‘clean me’ graffiti
Littering the dressing room with brochures for European travel
And, Top club prankster Joey O’Brien’s specialty, vandalising the visitors toilets by filling the cistern with bubble bath.
However, Big Sam Allardyce has some other worries to contend with – it is feared that the Wicked Dave Whelan remains distraught at the loss of Momo Diame to the Hammers during the Summer and may try to kidnap the midfield dynamo during the game.  Luckily, the Hammers backroom staff has assembled a range of cunning disguises for the Senegalese to use during the match that should make him virtually impossible to identify.

Momo: Master of Disguises
Meanwhile, Hammers top sports psychologist, Marco Boogers  has identified what he considers to be the key tussle within the match highlighting the mouthwatering meeting of EA sports stats busybody Mark Noble vs his boyhood here, The Duracell Rabbit 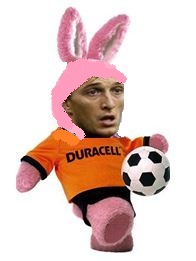