This Could Be One of the Games of the Season!

Here we go, it's truly the business end of the season and unusually the Hammers are in the thick of the battle for European places. It's the perfect time for West ham to host their great friends and neighbours Tottenham Hotspur. Although we cannot be there in the flesh to support our heroes, the Hammers fanbase will no doubt be there in force.

This is a big chance to really put one over on Spurs as a win would send us back in to the top four and a full 9 points clear of Jose Mourinho's stuttering stars. However, its a game that is always hard to call and that traditionally has no respect for current form! The clash presents a fascinating array of possibilities as Moyes and Mourinho go head to head.

This will test David Moyes mindgame abilities - should he spring a surprise by starting with Lanzini - a player who has started to recover his form and who scored one of the goals of the season in sealing a remarkable comeback in the earlier fixture this season as West ham stole a draw with 3 goals in a crazy final 8 minutes!

Or will he start with Captain Claret to impose experience in midfield - an area of the pitch where West ham will expect to dominate. Will he continue with Ben Johnson after his excellent performance in Monday night's thrashing of Sheffield United. Or will he stick Ryan Fredericks on from the start to counter Spurs pace on the break?

And then there's the whole frontline uncertainty. Key to this will be whether Antonio is available and if so will he be his abrasive best? Will Said Benrahma or Jarrod Bowen make the first XI to partner Jesse Lingard?

At the back it will be a big game for Issa Diop. The lad has been unlucky with injuries but will need to at his best to manage the physicality of Harry Kane.

All in all it's a cracking propspect. 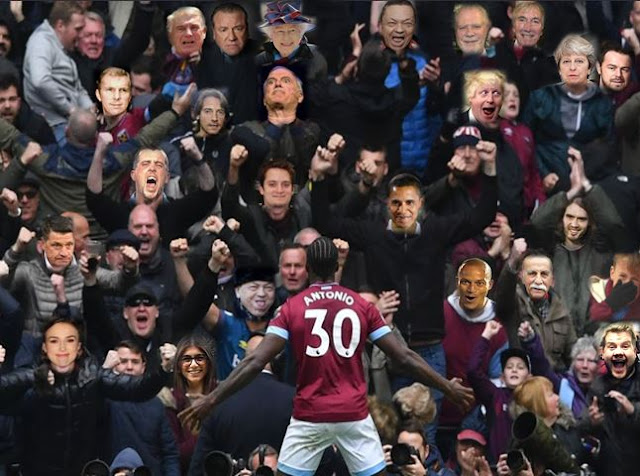 Why not have a little sing along with our celebrity fans as you savour the scene?