Five things we have learned about West Ham this week 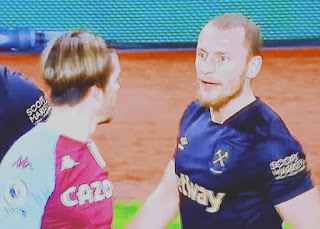 Its been a week of great happiness at West ham with a brilliant away win at Villa and a genuine sense that this squad can really go places, possibly even to a level we have never been before as the outside chance of Champions League football has entered our consciousness.

The week began with an underwhelming performance against Liverpool where Moyes' men failed to get to grips with a makeshift Reds and eventually were rolled over as Liverpool scored three brilliant goals to coast home. Of note, Michail Antonio missed a great chance to put the Hammers ahead before the Red tide took over but in reality West ham lacked the ambition needed to to ask questions of the Liverpool defence and we ultimately paid the price.

But this Hammers team is made of tough stuff and bounced back with possibly our best showing of the season against Villa, with 5-star performances all round as new signing Jesse Lingard slotted in to a fully firing attack and Villa simply couldn't cope.

So, a big week that had many reveals about the current state of the club. Five points stand out.

1. This team is the most physically robust we have had in decades. We are a nightmare from set pieces and have energy to burn. Historically we have been a side that runs out of puff in the final 15 minutes but under headmaster Moyes we are properly conditioned. Add to that the array of talent on the bench and we have tremendous capacity to maintain tempo throughout games.

2. The Moyes method may not be glamorous bit it is really working and the players respect him. Our defensive set up is excellent, helped by having the huge presence of Rice and Soucek in front of it and a team of wide midfielders who recognise their defensive duties as of equal importance to their efforts in attack. So many players have improved their game under his coaching that we will need to be wary of bigger clubs trying to pinch them when Summer comes - who wouldn't want a player who has prospered under his demanding and disciplined system? Moyes has been hard-headed about transfers as he does not want to disrupt a happy squad and although there have been exceptions, the January transfer market is a place of desperation rather than opportunity. For every Soucek there have been ten Benny McCarthys. Lets hope that our lack of an established back up striker doesn't derail things but talk about bringing in Costa or Sakho is nonsense. They really are not Moyes-type personalities!

3. The squad has great depth in defence and attacking midfielders but we lack cover in central midfield and up front. This, sadly, may be our undoing in terms of a top six finish as injuries to any of Rice, Soucek or Antonio would dramatically alter our ability to dominate games. That said, with a bit of luck in terms of injuries we have a shape and momentum that makes us a real headache for any opposition. One disappointment of late has been the failure to give young striking talent Mipo Odubeko some game time. At 3-0 against Liverpool the game was lost and surely that was the moment to withdraw Antonio and give the young lad a run. Anybody who has watched the footage of his U23 efforts will be excited by his potential as he has a real finishing edge and plenty of guile. Time will tell if he can make the massive leap to the top level but he looks like a genuinely exciting prospect.

4. Vlad Coufal is the best right back we have hsd since Ray Stewart - so says Tonka himself and he's right. There has rightly been much praise for his performance in cancelling Jack Grealish in midweek, but that has merely been the latest in a series of top performances. He is strong in every aspect of the game but perhaps most of all its his football brain that singles him out. His decision making is simply outstanding and he manages to deliver just the right amount of aggression in these treacherous times for defenders where forwards constantly go down with minimal contact. Add to that his calmness in attack and he really is the whole package.

5. The battle for Hammer of the year will be the closest ever! Its nip and tuck between Soucek, Coufal, Rice, Ogbonna who in any other sesson would already have justified the award.