Proof: The Referees a Merchant.....Hammers Bottom of Good Fortune League

Time and again we are told that those game changing decisions all balance out eventually. At the end of the day, the best rather than the luckiest sides come out on top. Indeed.

But is that really the case? Few fans would agree, but they are hardly neutral. So what happens when we get the opinions of neutrals using all the technology that is denied to match officials?

The dudes at Teamtalk.com run an ongoing table that monitors key decisions - red cards / penalties etc. It makes for fascinating reading and will do little to quell the paranoia of many fans who believe that the 'bigger' clubs get a disproportionate number of close calls going in their favour! The table shows that the top six 'lucky' sides include an obvious five, along with top of the table Leicester. Hmmm.

As for the Hammers, we are the joint unluckiest team in the Premiership just now with a whopping 80% of key calls going against us. In fact, the teamtalk guys only based their Gestede/Ogbonna decision on the contact that led to the penalty but overlooked the blatantly illegal shirt pull on poor Ogbonna immediately before the contact!

Adjusting for that we are officially the most unlucky side in the league! One can only imagine where we would be in the league if a few of those calls had gone our way!

Let's start a campaign. We demand a fair deal from the match officials or we will refuse to play in the Europa League ever again. Also, maybe Slaven needs to be less 'reasonable' with the referees? Take a look for yourself... 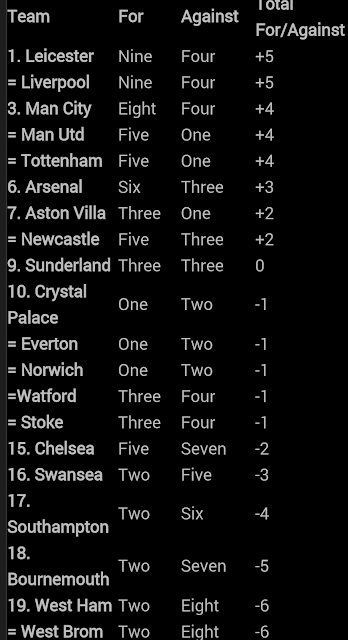