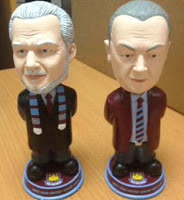 In shock developments that will undoubtedly irritate and annoy Hammers fans, the clubs owners have been deliberately and systematically robbed of their rightful place as top chairmen in the Premiership in two consecutive polls!

Having been ranked as only third best in terms of club garden accessories for their Davidgnomes that can be purchased through the club shop for a mere £11.99 each, they have now been ranked as best losers in a Telegraph poll of Premiership suits!

The survey ranked each Premier League club owner on five categories - investment, popularity, enthusiasm, avoiding controversy  and communication. The Joint-Chairmen scored at least 8/10 on four out of the five categories, leading them to equal second place tied with the owners of Swansea City and Crystal Palace, and just behind winners Manchester City in the overall table.

Hammers fans will have little problem working out which of the five categories they were marked down in!

With two defeats in a week in pointless polls, its time the Davids indulged in some decent controversy courting. Be honest, we'd be bored without it!