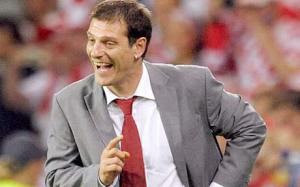 At last we have some good news on the injury front with word that the Hammers squad for the St Stephen's day clash with Aston Villa will be graced by the presence of Andy Carroll, a ninety-minute ready Enner Valencia, and most importantly, Manny Lanzini.

Good news indeed as we have had to resort to Allardycian tactics over the past few games where goalless encounters have been hailed as success given the lack of attacking resources. Nonetheless, accumulating just 27% of the possession against third from bottom Swansea is hardly a champagne-opening event! Moreover, it points to more than just offensive deficiencies as Noble and Company in the midfield can surely do better?

On the plus side, we have demonstrated how strong our defence can be, with the Ginger Pele reminding us all why he must stay at West ham for another two year contract. Up front, however, it's frustrating to watch Jelavic occupying a spot which young Elliot Lee has patiently waited for over the past few seasons but finds himself on loan at Blackpool just when his big chance arrives.

Villa really is a must win fame as they are struggling big time. Reports suggest that they are even desperate enough to take on the dubious talent that is Morgan Amalfitano.

The return of Lanzini can bring that spark that has been lacking. The Argentinian has been a revelation since arriving in the Summer and has especially demonstrated his worth during the Payet absence where he has been our most creative force.

In other good news, Goldie has revealed that superhero Dimitri Payet is recovering ahead of schedule and should return mid January.