What's gone wrong with our defence? 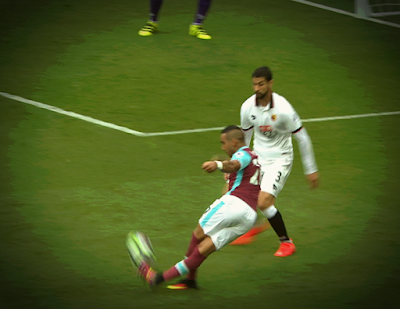 So far this season West ham have been struggling defensively, culminating a an embarrasing implosion yesterday where in truth Watford could have easily scored five or six goals.

The preseason campaign was unimpressive with a concession rate of over two games per game even though many of the games were against modest North American and Austrian opposition.

Further warning signs went out after the dusappointing defeat to Astra which, rather like yesterday, occured from a winning position after the Hammers were gifted an away goal in Romania.

So what has gone wrong - the success of last year was undoubtedly built upon our ability to suffocate opposition sides which allowed for a series of famous victories over all the traditional top six sides.

Undoubtedly the right back situation has been problematic as SuperSlav showed the less positive side to his stubborn determination by prolonging a visibly failing experiment using Michail Antonio at right back.

All the while, our defence has become unbalanced and nervous looking. Watford's openibg goal testerday was typical of the poor defensive positioning at right back as Sam Byram 'did an Antonio' by allowing himself to drift 5 yards off his man and then mysteriously allowed Odion Ighalo to turn inside with disastrous consequenxes as his shot deflected off James Collins for a mighty soft goal that allowed a Watford side who had been totally outplayed until that point back into the game.

Watford's equaliser was truly embarrassing as Adrian and Ginge messed up yheir shouts and gifted Troy Deeney the chance to equalise. Undoubtedly, the opportunity was deftly executed with a delightful lob that the retreating Masuaku couldn't quite keep out, but the ball should gave been easily dealt with without any such danger.

The response after the break was really disappointing. West ham lost yheir way and conceded another sift goal as Sam Byram failed to cut out a cross to the right side of the box leaving Capoue on his own yo rifle a shot high onyo the net. On another day Adrian would have pushed it over the bar but Watford were on a roll.

Cue another embarrassing goal as Ighalo was allowed to dance around the right side of the penalty area (again with Byran in hapless oursuit) before teeing the ball up for a low strike that again Adrain could have kept out on another day.

It's a real pity that a day that should have been remembered for Antonio's brilliant brace that emphasised his resurgenge since returning to his natural attacking position as well as the fabulous rabona cross from Payet for the second goal, in fact was more notable for a series of comically inept defensive cock ups.

Even worse, Angelo Ogbonna posted an unhelpful post match tweet that is likely to impede his return to the starting XI.

There certainly is lots of work to be done on the training ground by Mr Dicks and Co who are mighty quiet just now having been hailed as rock solid this time last year. The right side of our defence needs serious working on as Collins and Byram are not managing the space between RB and right CB properly. However, perhaps the biggest single issue is that we have lost confidence and need a few decent defensive showings to get the boys talking again. With Arbeloa still short of match fitness, Sam Byram will surely get another chance or two, but things need to improve rapidly.
Posted by Verywestham at 00:22