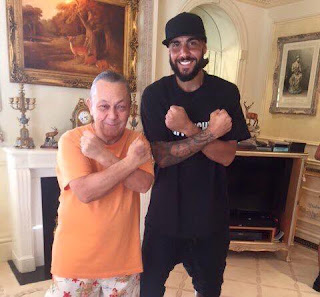 With the arrival of their latest capture, West ham suddenly risk the possibility of having an embarrassment of riches up front. If SuperSlav can tame Sakho, we might hit December with the choice of any from Carroll, Ayew, Calleri, Fletcher, Sakho, and now Simone Zaza!

The Italian international has arrived in a season-long loan, with an option to make the arrangement more permanent if he gels. While our rivals may well snigger as Zaza brings to mind his awful penalty at Euro 2016, Hammers fans will know him for his stunning strike against us for Juve a few weeks back; surely the best goal to be scored at the Olympic stadium so far?

In pictures that serve to confirm his arrival, Mr Sullivan's persuasive negotiating style is laid to bear; who could possibly argue with a man who meets you to discuss terms in his boxer shorts? Where would you look? Even the most brazen soccer superstars would melt into submission and surely agree to anything to get out of there!

Meanwhile, Hammers fans have developed a reputation for top quality tribute songs for their players and the race is on to find a suitable chant for Zaza. Let's hope he scores soon so we can put our suggestions to the test....

And don't forget, Zaza rhymes with Gazza....there's simply got to be an angle there?
Posted by Verywestham at 18:55