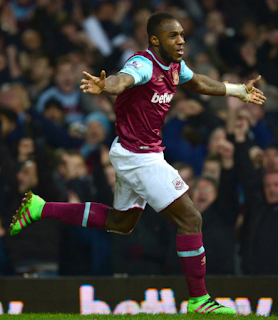 As the Summer transfer rumour mill turns over it's apparent that the newest entrant to the privileged clubs gang is being linked with exorbitant bids for just about every potentially available striker on the planet! Lacazette, Bacca, Van Persie, Carlton Cole....the list is endless! However, one thing which seems lost in all of this is that the Hammers are light at right back.

Last season saw the departure of Carl Jenkinson through injury (and poor form) and the arrival of young Sam Byram was viewed as an ideal longer term solution. Byram out in a series of solid performances after his arrival but clearly has quite a bit to learn yet before he can secure a starting place in the defence of a side that has series Premiership and European aspirations.

James Tomkins loyally provided tremendous cover at right back but has now (astonishingly?) departed much to the chagrin of many diehard hard fans. Michail Antonio also put in some decent shifts but quite frankly, he is a super attacking threat and is wasted at right back where he also lacks the positional sense to be relied upon in big matches.

So far there hasn't been a peep about the right back berth apart from some silly rumours that Byram might switch to join the other dozen or so right backs currently on the books at Arsenal?.......hmmmm.