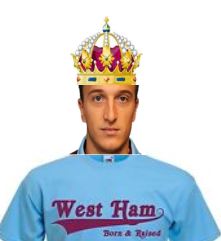 About bloody time!!! After more than a decade of loyal service Mark Noble has finally been rewarded with the permanent Captain's role at West Ham.

Although it looks like an obvious choice, the competition for midfield places is such that the announcement sheds some light on Slaven Bilic's perception of his assets.

The new Captain has already celebrated by creating the opening goal for Dimitri Payet against Newcastle tonight.

You'd still have to wonder what will happen when Alex Song becomes available to compete with Noble, Kouyate, Obiang et al for the key holding berth.
Posted by Verywestham at 12:21