West Ham deducted 15 points ahead of Premiership run in! 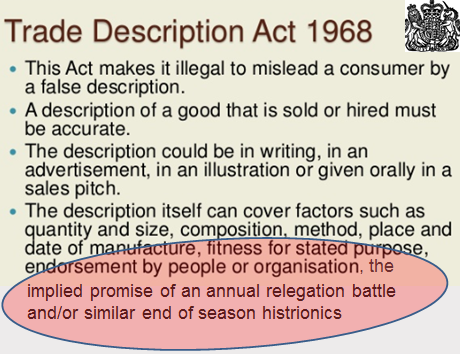 It simply had to happen. Faced with endless moaning from bored West Ham fans, Premiership chiefs have finally buckled under the pressure and deducted a whopping 15 points from the club for being "too boring". The Hammers are now dragged away from mid table tedium and, with a revised total of 27 points, are back into their traditional relegation dog fight! Put those gardening utensils away folks - it's squeeky bum time again!

It is thought that the final straw came when fans threatened to report the club for a breach of the trade descriptions act. Jack Windybottom, a lifelong Hammer, explained the grounds for such a complaint "Everyone knows what West Ham are all about - pretty football, nice passing in midfield, cruel misfortune in the final five minutes of games, and an annual relegation battle that leaves fans awake at night worrying how we can possibly win at Old Trafford on the last day of the season in order to stay up"


The many fans who were unhappy with the Hammers 1-0 victory over Sunderland yesterday will surely see things differently in light of the revised Premiership table. Three precious points against fellow strugglers are simply gold dust. Moreover, the quality of the defensive performance augers well in the relegation run in as one must feel that West Ham are capable of getting points off anybody. Big Sam deserves praise for grinding out a precious win and ending a run of terrible results. Moreover, keeping a clean sheet was all the more impressive given the makeshift nature of the centre back pairing, where Cheikidh Kouyate once again demonstrated his versatility.

On the positive side, the upcoming games against Leicester, QPR, Villa and Burnley now suddenly take on a different complexion. Rather than a lurching towards the season's end in a methadrone-induced stupor, Hammers fans need to prepare for a series of do or die battles that will require passion and guts. Paul Bottomley, President of the East Ham and Plaistow Small Traders Association, explained "the end of season always brings a welcome increase in demand for incontinence pads and adult diapers as fans of West Ham deal with the pressure of possible relegation to the dreaded Chumpionship. Without this income, many of our members would simply go out of business".
﻿﻿
﻿
Meanwhile, speaking of points deductions and relegation, poor Wigan Athletic look destined to join tragic Sheffield United in League One (The Old Division Three) after managing a mere draw yesterday and find themselves five points adrift with seven games to go.
Posted by Verywestham at 03:58