Fed up with all the squad-unsettling speculation regarding his future, Hammers central defensive ace Winston 'Wonderful' Reid  has decided to follow in the tradition of our best poets and ‘show not tell’ by chaining himself to the gates of the Upton park stadium in order to send out the strongest possible message to the Gooners of Middle Arse and Liverfool that he is a resolute Hammer. 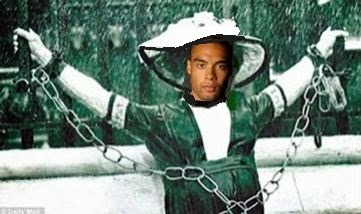 Reports emerging from the Star Newspaper, Britain's leading Sports media outlet, indicate that Reid has agreed to a new four year contract at the considerably increased wage of 60K per week. However, despite these reports, the crafty board at West Ham have taken the precautionary measure of also physically securing the ace defender using some items from the current Ann Summers 'friendly' S&M range.

With the Olympic era looming, only a fool would leave the good ship Hammers right now!