As West ham and Stoke City recover after Yesterday’s hostilities, we consider the connection between the clubs, and have compiled a team of the best players who have played for both sides – The Potty Hammers XI! 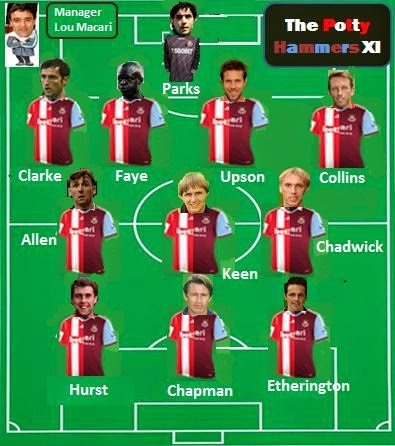 Tony Parks: Back up keeper for Spurs for almost a decade during which he managed 40 or so appearances but did make the UEFA Cup Final side in 1984. Wandered thereafter, putting in a six game spell at West Ham before moving for a further couple of games as a Potter. Just edged out the great Peter Shilton since 'Shilts' never actually played for the HAmmers despite arriving as goalkeeping backup at a mere 47 years of age!!! Parks is currently employed as goalkeeping coach for Norwich.

Abdoulaye Faye: Senegalese international who was discovered for English football by Sam Allardyce who brought him to Bolton and then on to Newcastle. After that he put in a decent three year spell at Stoke City before rejoining Sam to play a crucial role in the 2011-2 promotion side. Left for Hull City and has now retired.

Matthew Upson: Arrived to Upton Park for 6 million from Birmingham as part of the ill-fated Icelandic period. Put in a decent 5 years at Upton Park and rose to become club captain before the Allardyce era arrived and he was let go to Stoke. Never quite claimed his place at the Britannia and left for Brighton in 2013. Currently ‘squadding’ with Leicester City.

Clive Clarke: Stalwart at Stoke City for six years during which he amassed over 200 appearances. Moved to West ham in 2005 but didn’t make the grade and moved on to Sunderland. Suffered a career-ending cardiac arrest during half time of a Notts Forest versus Leicester in 2007 but thankfully was resuscitated. No clear cause has ever been identified for the episode. Now works as a players agent in Ireland.

Danny Collins: Arrived at Stoke from Sunderland in 2009 and his first two seasons were decent before falling out of favour with Tony Pulis and finding himself without a squad number. Provided emergency cover for West Ham during an injury crisis that threatened their promotion campaign in 2012. Moved on to Notts Forest where he remains to the present.

Kevin Keen: Joined the Hammers at age 16 and put in a successful decade as a busy midfielder. Moved for a season to Wolves before rejoining old manager Lou Macari at Stroke where he enjoyed a six year spell. Has been involved in a variety of coaching roles at West Ham and acted as caretaker manager on three occasions over the years. Currently coaching at Fulham.

Paul Allen: Smashed into the limelight as a mere 17 year old in the triumphant West Ham 1980 Cup final team. Amassed over 150 appearances before being poached by Spurs where he spent  8 years before winding down at a variety of clubs, including a spell at Stoke City.

Luke Chadwick: ‘Chompers’  arrived at the Boleyn in 2004 on a free transfer from man United. Solid two years before departing for a spell at Stoke. Later found his level at MK Dons where he amassed over 200 appearances.

Matthew Etherington: Pacey and exciting winger who was much loved at the Boleyn during his six years there but ultimately had to get out of Dodge due to gambling issues and Stoke City were the benefactors. Also a good performer at Stoke for five years until let go last Summer. Enigmatic!

Lee Chapman:  Started out at Stoke City where he played 100 games over four years before moving to Arsenal and then to Sheffield Wednesday and Leeds for productive spells. A classic piece of Redknapp business, an aged Chapman arrived at the Boleyn in 1993 and helped the Bubbles to avoid relegation.

Geoff Hurst. Legend. 180 goals in 411 appearances. His move to Stoke in 1972 at age 31 followed a League Cup final penalty miss against Gordon Banks and Stoke the previous season. Put in a decent three years at Stoke before moving towards a variety of pre-retirement slots. A gentleman of the highest order, he is still happily signing shirts with ‘they think it’s all over….” for the latest  generation of kids trying to catch a taste of 1966.

Manager: Lou Macari: Celtic and man United hero as a player, Lou put in a six month spell at the helm at Upton Park but never quite fitted in. He then had two spells as manager at Stoke City and in between a period at Celtic. The second period at Stoke ended badly and with legal action over alleged unfair dismissal. A strict disciplinarian that did not always endear him to other staff.

So there we have it – a solid side no doubt, perhaps lacking pace at the back but with an interesting attack where Sir Geoff is always likely to score.
Posted by Verywestham at 00:35