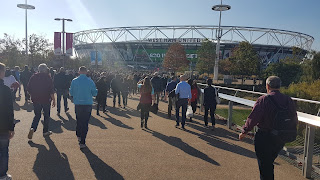 There were few surprises in store for Hammers fans as David Moyes revealed his first XI for today's visit of Bournemouth. With Antonio injured perhaps the only surprise is the omission of Issa Diop with Balbuena coming in. Manny Lanzini makes way for Robert Snodgrass, while Carlos Sanchez drops to the bench for the returning Captain Claret. We can presume it'll be a 4-5-1 set up.

Kick off is at 5.30. Failure to get a result will mean that the Hammers are in the relegation zone as Villa won earlier. There's a good atmosphere at the stadium so lets hope the lads can garner that energy and get a decent start to our new chapter.