When your sporting stars align

In the latest of our occasional series of guest blogs we have the thoughts of Professor Henry O'Connell, Liverpool fan, Tipperary hurling fanatic and top shrink. Henry had the pleasure of catching his beloved Reds when they stumbled into the London Stadium last year and were lucky to get away with a 1-1 draw as they were strangely out of sorts and couldn't get any rhythm, even after being given a 1-0 start due to a blatantly offside goal (yes VAR would have disallowed it if it were this season!).

Over to you Henry... 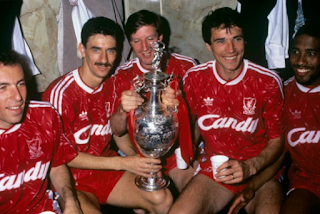 The start of a new decade and the recent success of my two teams (the Tipperary hurling team and Liverpool FC) has got me thinking that my sporting stars are starting to align perfectly for just the second time in my life, like that brief magical period of a few weeks in the summer of 1990.

For non-Irish readers, hurling is an ancient Irish game that resembles field hockey but is played at a much more frenetic pace, with the players being able to catch and run with the ball. The ‘Premier League’ of hurling is the All-Ireland Senior Hurling Championship, played between 12 different Irish counties. The season runs from May to September with the final being played in Croke Park Dublin in front of 80,000 people. Every boy (and many girls) from hurling counties grows up supporting their county team and dreaming of one day playing for them. Despite being 46 years old and never being a particularly accomplished under-age player, one of my get-to-sleep fantasies is still the one where I score an injury time winning goal for Tipperary in an All-Ireland final with all of my friends, family (and enemies) in the crowd.

Hurling (and its far less elegant companion game of Gaelic Football) has strong historic links with Irish independence and nationalism and, therefore, a certain anti-Englishness. However, most Irish hurling fans are also avid followers of the actual Premier League, and everyone has a team. So while I was born as a supporter of the Tipperary hurling team (being a native of that county) and started going to their games with my father from the age of 6, I became a supporter of Liverpool FC, by my own choice.

In fact, I remember the exact moment when I became a Liverpool supporter. It was 1982, I was nine years old and I had a vague idea that there was this great football team that wore all red and whose fans sang songs. I was in a shop in our village and I picked up a Liverpool FC mug from a shelf. The mug had details of all of Liverpool’s titles and achievements. I was astounded at the number of successes. At the same time, I thought of the strong Irish contingent with the club at that stage: Mark Lawrenson, Jim Beglin, Ronnie Whelan and Ian Rush (who I thought was Irish). And then a wave came over me and I remember saying to myself something along the lines of: ‘these guys are brilliant!’ Thus began my love affair with Liverpool FC.

So anyway, back to the summer of 1990. Tipperary had won the All-Ireland championship in September 1989 and so they were still the reigning champions in the summer of 1990. The 1989 win had been extremely special, being Tipperary’s first championship win since 1971 (and so the first in my lifetime). And Liverpool had just won the First Division title in May 1990. But the absolute peak of sporting-stars-alignment took place specifically on June 25th 1990. I sat (and stood and jumped and screamed) with my father and brother in our sitting room, watching Ireland beat Romania in a penalty shoot-out and progressing to the quarter finals of our first ever World Cup, to take on the hosts Italy in Rome.

Of course I didn’t realise or appreciate just how special those few weeks were until many years later. Just after the Irish victory over Romania, I headed off on that Irish rite of passage to ‘the Gaeltacht’ (Irish language school) in Connemara for the rest of the summer. There I watched the Italy game on June 30th and saw Salvatore ‘Toto’ Schillaci score the only goal as Italy progressed to the semi-final at Ireland’s expense. Two weeks later, on July 15th, I got the news from home that Cork had beaten our beloved Tipperary in the Munster hurling final, thus eliminating us from the All-Ireland hurling championship. And the rest, as they say, is history. Tipperary would go on to win intermittent but too infrequent All-Ireland championships, in 1991, 2001, 2010, 2016 and again last August, making us the current reigning champions. And despite keeping the trophy case ticking over since 1990, Liverpool would never again be champions of England. To add insult to injury, the greatest rivals of Tipperary and Liverpool (the Kilkenny hurlers and Manchester United, respectively) would go on to have unprecedented levels of success in the subsequent three decades.

But of course 2020 looks like Liverpool’s dismal record might finally come to an end. Even the most cautious and pessimistic of Liverpool fans realises that the current lead is a healthy one. So in May 2020, Tipperary will still be the reigning All-Ireland hurling champions, Liverpool will (please God) be champions of England (and Europe, and even the world, if you take that latter competition seriously). So, three decades on from that last sporting zenith in 1990, my sporting stars will again (please God, again) be aligned. As for the Republic of Ireland football team – well I guess you can’t have it all…