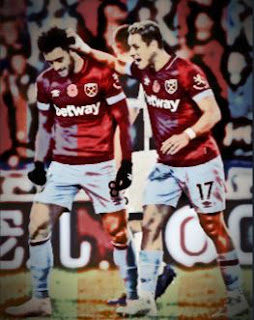 It was a perfect start to the December campaign for Manuel Pellegrini's men as they picked up a win away to an on-form Newcastle side. Pelle will have been very pleased with the all-round display as West Ham were simply much better than the Magpies on the day. He will have enjoyed getting one over on Rafa Benitez who was all too frequently mentioned as a possible replacement for Pellegrini during the Chilean's difficult beginning at the club. Strating with an unexpectedly aggressive formation, Pellegrini threw down the gauntlet to the Geordies and watched as his troops ran the show pretty much from start to finish picking up a deserved 3-0 victory that included a rare clean sheet. Happy days and a real confidence boost ahead of Tuesday's tussle with Cardiff City at the Olympic Stadium. Here are our player ratings:
Lukasz Fabianski: 7/10


Had to make quite a lot of saves, mostly for shots from distance as Newcastle enjoyed a fair amount of benign possession and were often forced to shoot from distance as the West Ham defence looked tight and enjoyed achieving only their second clean sheet of the season. Very solid presence and has been a great acquisition.


Has proven the doubters wrong as he clearly still is at Premiership level and again demonstrated his clever footballing brain as he snuffed out Kenedy. With Ryan Fredericks out for some time, the yellow card he picked up today was the one down side in a great performance.


When the Hammers forked out £20million for the young Frenchman in the Summer many of us wondered if we were a bit hasty! Remember Savio anyone? Issa has totally silenced any doubters with a series of top performances. Yet again today he was strong and assured and took little nonsense from Rondon et al.


Another fabulous signing who enjoyed a top performance again today, showing physicality in defence and guile in possession. Superb stuff. Reminds me of Steve Potts (albeit taller!).


More reliable defensively than Masuaku and this game demonstrated the difference between the two players. Cressy needs game time to build the relationship with Anderson which will see him recover to the high standards of two seasons ago that got him an England call up. Let’s hope his injury isn’t too serious.


Another top performance both defensively and moving forward. Has that appealing habit of moving the ball quickly. Started the move that led to Anderson’s goal with an aggressive header out of defence.  Great positional awareness allowed him to boss the midfield.


His rehabilitation at West Ham has been an important aspect of the new regime and much needed given the relative shortage of midfielders at the club. Great cross for Chica’s first but all day he looked likely to create something.


Captain Claret just kept going all day making sure that everybody did their job while also covering an immense amount of territory. Stupid booking but otherwise he once again silenced the doubters who feel he may have too many miles on the clock – his savvy leadership more than makes up for any lack of pace. Excellent stuff!


When he’s good, we rock! Enjoyed himself out there today and managed to concede possession less than he sometimes does against sterner opposition. Delivery from set pieces might have been better but plenty of craft and also graft in terms of tracking back. Surprisingly strong to stay on his feet for the goal!


Undoubtedly his happiest day in a West Ham shirt. Pellegrini opted to play an attacking formation and gave the Mexican only his 3rd start of the season but he gave us all plenty to ponder on as he demonstrated that if you give him the service that he will deliver goals- two today in a MOTM performance.


A day when it didn’t quite happen for Marko as he missed a number of decent chances, especially when West Ham were just 1-0 up. Did manage an assist for Chica’s second goal, so not a totally quiet day but we have great expectations for our talisman!


Arthur Masuaku (55'): Looked very nervy and gave away a free kick with 12 minutes left that could have ruined a great day.


Pedro Obiang (70'): Solid stuff as he shored up the midfield and allowed us to close out the game.


Jack Wilshere (85'): Good to see him back and great to get a few game minutes. Nice through pass to assist Anderson for the third goal.
Posted by Verywestham at 10:08