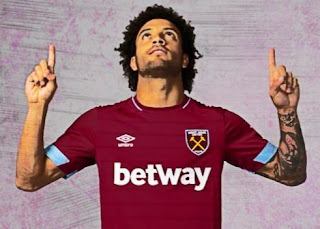 Manuel Pellegrini has shown the kind of mettle that makes for great management since coming to West Ham last Summer. After a dreadful start that saw his side bottom of the league after 5 games, he refused to panic and even goaded the sporting press who were already calling for his head by saying that he would never change his style no matter what.

Since then, his players have adapted to his attractive and open style and the results have started to flow. After a deserved victory over Crystal Palace today, the Hammers third in a row, they have now hauled themselves up to tenth and are even eyeing Man United who are just a few points ahead and lying in sixth position. With plenty of winnable games ahead in December, 2019 seems set to see the Hammers push to a higher level.

Central to Pelle's revolution was the arrival of Brazilian winger Felipe Anderson. His transfer was drawn out before he eventually moved from Lazio to the Olympic Stadium for a club record £47million transfer fee! At the time many fans were quite sceptical about the merits of his arrival, especially since he had failed to make the cut for a relatively mediocre Brazilian squad for the World Cup.

Moreover, feedback from our contemporaries at Lazio indicated that he had enjoyed mixed fortunes in Rome and had fallen out of the starting XI and picked up an 'inconsistent' label.

And so to the Premiership. From the start it has been obvious that Felipe can play a bit! Initially he visibly struggled with the intensity of English football but demonstrated a determination to adapt. His commitment to the cause was also obvious as despite his preference for offensive play, he has not been shy in tracking back to help out with defensive duties and these 'turnovers' in possession frequently lead to some of our best attacking opportunities. Modern soccer has become like rugby whereby most teams can defend to a high level and using turnover possession is often the key to winning games.

The English game has really started to suit our Brazilian talent - Anderson likes to take chances by playing high risk balls that sometimes don't come off but when successful can carve open the opposition. In that sense, the lower emphasis upon holding possession in the Premiership (compared to the ball-mongers of Serie A for example) suits Felipe's style.

At West ham we have had a lot of skilful wide players in recent years but the majority have not been prolific goalscorers. Anderson brings all the jinky and incisive dribbling of a good winger but also has that crucial ability to take responsibility for the finished product himself. As such, defenders cannot rely upon him passing the ball as he is quite capable of finishing attacking moves on his own. His cracker against Newcastle last week was an excellent example of this where his direct and pacey running knocked the much bigger Newcastle defender aside as he plummeled the ball into the net.

Defenders cannot afford to stand off him but equally, his quick feet make any rash defending likely to end in embarrassment! His strike against Palace today was through the eye of a needle and demonstrates his incredible technical skill. His free kick was similarly tantalising and poor Wayne Hennessy could do little to keep it out without presenting Chicharito with a tap in!

Finally, the London Stadium has been a less than joyous place since our move 3 seasons ago. We were promised attractive and entertaining football - at last we have a squad who look capable of getting results while also playing football that amuses, titillates and inspires. We all yearn for a new Paolo or Payet to liven up our matchdays. Anderson is the closest we have come since Payet's disappointing exit. If he can keep up his recent form we might honestly start to mention him in the same breath as Mr Di Canio.

Just maybe, but whatever else, we are dreaming again. Thankyou Felipe!

Even better, in the past few games the unrest of last season seems a long long time ago. With Arnie out our other big names stepped up. Happy days!