It's all cuddles in the bubbles! 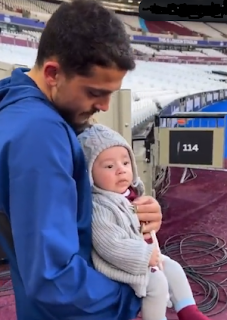 Amid the terrible situation currently unfolding in the Ukraine there was an island of positivity at the London Stadium yesterday.

West ham have been rocked by the awful scenes with Andriy Yarmolenko's compatriots very much in our thoughts before during and after the game yesterday.

Solidarity with Ukraine was emblazoned around the stadium with pictures of Andriy and his national colours as team captain of the Ukraine national team. Declan Rice held his jersey aloft during the pre-match routine and later dedicated the vital 1-0 win to our brother.

Meanwhile, Tomas Soucek dedicated his winning goal to his grandfather who had travelled to watch him play for the first time since COVID restrictions were lifted - pointing up to him in the stands during his goal celebrations.

And Pablo Fornals underlined the family-friendly atmosphere that characterises the ground by bringing hsi newborn on a stadium tour before the match, all the while singing "Come on you Irons"!

These are difficult times but if we stick together for what is decent we can see it through.

Classy stuff from all concerned!