Time To Push On For Buoyant Hammers 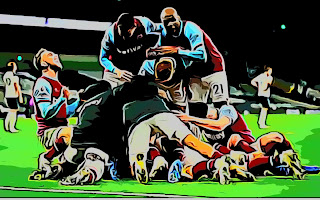 It's not quite the 1975 FA cup final, but tonight's clash between West Ham and Fulham is an important one as it can define where an in form Hammers side can set their sights. After a tough start to the sesson, David Moyes' men are mid table and ready to push on between now and Christmas. Unfortunately, as every Hammers fan knows only too well, these are the type of games where we tend to underperform!

With Michail Antonio still recovering from his hamstring problem, Seb Haller will likely get another chance to impress. His performance against Liverpool was disappointing - understandably he didn't get a lot of quality ball, but his chasing down was virtually non-existent and allowed the Reds a cosy platform to build possession from the back.

That said,  with Rice and Soucek building a forceful midfield partnership, the Hammers will be looking to dominate possession which will suit Haller. Rice has commented in midweek how he wants to grow into a Scott Parker like presence and tonight he will have the chance to impress the three-times Hammer of the year who is at the helm for Fulham.

The cottagers had a crucial win against the Baggies last time out but have had little else to cheer in a poor season to date, losing all but one other game so far (a draw with the Blades).