Anyone feeling a bit dirty? 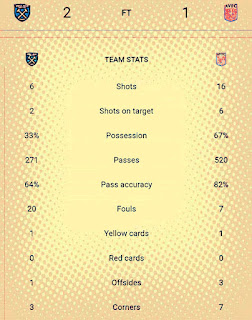 There's very little arguing with flying Fifth in the table but any Hammers fans starting to get big ideas might need to think again. The win is always the most important statistic in any game but in every other way Aston Villa are entitled to feel hard done by to leave the London stadium with nothing to show after dominating both halves of the game - apart from the first 2 minutes of each in which they conceded soft goals.

But enough of Villa, what is wrong with West ham? The loss to Newcastle in the opening fixture of the season remains our worst performance, but the three wins over Fulham, Sheff United and Villa were all disappointing shows where we stumbled home with all the points but little else to be pleased with.

Against Villa we enjoyed just one third of possession, which as the home team is genuinely troubling. Gone is the quick passing and sleak interplay that underpinned our performances against Man City, Arsenal and Liverpool (from which we only managed a point but demonstrated our credentials as a tough side to dominate).

Winning with sub-par performances is one of the characteristics of a good side but frankly we are pushing our luck at this stage!

At the core of the problem is our poor passing accuracy. Add to that our increasing reliance on long balls out of defence (yes, that's you Fab and Balbuena) to the relatively immobile Haller. Michail Antonio looked tentative tonight but if he stays fit we can expect to get more out of long balls but in reality we need to use the back five to pass out from the back.

Also worrying tonite was the inability of Rice and Soucek to get any real hold on midfield. We were left chasing shadows after Grealish but in reality most sides find him a handful. But Hourihane and McGinn also found it all too easy. Moyes tried to stop the rot by changing it up at half time by going 4-5-1 but to no avail.

With Man Utd visiting on Saturday night we need to get back to the drawing board and start passing the ball a whole lot better. Then again, we do seem to up our game for them so it'll be the perfect game to match a winning result with a decent performance.

As for tonight, its hard not to feel for a Villa side who deserved at least a point.