Forget formations: with Pellegrini it's about the quality of your players!

The volume of action involving West Ham in the transfer market since Manuel Pellegrini arrived has come as a surprise to many fans but an analysis of the Chilean mastermind's history quickly reveals that the Davids have gone for a truly bold selection as new manager.

Pellegrini has been hugely successful as a coach both in South America and La Liga, as well as winning the Premiership with Man City in 2014, scoring 102 goals while conceding just 37.

Pellegrini's emphasis is undoubtedly an attacking one - often playing with two strikers in a 4-2-2-2 formation. He demands great mobility from his players - expecting each forward to drift wide to link in with  marauding full backs and create space for passing triangles with the attacking midfielders. Played correctly, it makes for an exciting spectacle and one that will undoubtedly please fans!

Pellegrini firmly believes in dominating possession and is an advocate of that old truism that the opposition cannot score without the ball! He is equally ebullient about playing your own game and has been critical of managers who base too much of their energies upon tactics designed to  stifle the opposition's game. That said, he can be very flexible and frequently shifts to a 4-2-3-1 against better sides and also at times has used a 4-1-4-1 or even a simple 4-4-2 usually to accomodate the skillset of particular players. Pellegrini sides like to defend high up and therefore he prefers players with pace and expects his teams to cover lots of yards and dominate possession - he surely would not approve of Moyes' method that often resulted in West ham conceding two thirds or more of possession - and not just against the top sides!

So, what are the implications for West Ham's set up? The loss of Andy Carroll may not be so big an issue given that he really is not a Pellegrini-style forward. Chicharito, on the other hand, should fit in much better than he did in the 4-5-1 of Moyes which exposed his lack of physicality. Ryan Fredericks has lots of pace and along with Aaron Cresswell should prosper in a more traditional full back role. In the holding role we might expect Wilshere/Noble to pair up with Obiang/Kouyate in front of the back four, while the attacking midfield of Anderson and Lanzini (after Christmas) would make for an exciting link with Arnie and Yarmolenko / Hernandez.

Add to all of that the unpredictable creative mayhem of Masuaku and Antonio and its looking very exciting up top. Pellegrini's preferred centre back pairing remains unclear and the opening game against Liverpool will tell us how close to the required standard he considers Declan Rice and the exciting French youngster Issa Diop. For such a big game one suspects he may go with the greater experience of Ogbonna and the newly arriving Balbuena - aka 'The General'.

And then there's the small issue of more arrivals to add to the mix!

I am so glad to have a season ticket for next year - it is going to be very exciting and whatever else, we will have committed attacking football from the home side at the London Stadium!

How about this? Note that the common formation building sites do not include a 4-2-2-2 function even though it is quite common in South America. 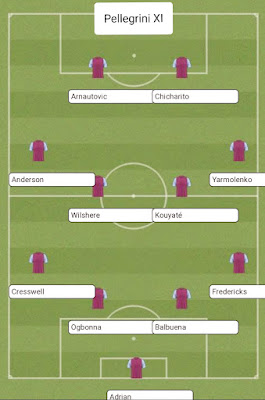