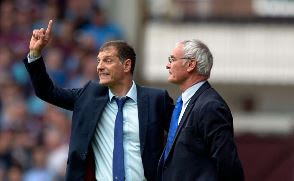 There are no major surprises in the line ups for today’s visit to the King Power with Slaven Bilic opting to stick with the same starting XI who thrashed hapless Swansea last week.
Whether they will line out as a 4-4-2 or 4-2-3-1 is less clear but with Leicester uncertain at the back we expect SuperSlav to take an attacking perspective and focus upon outscoring rather than containing the Foxes.
Mahrez and Huth return for Ranieri's side.  Kick off is in just over half an hour.