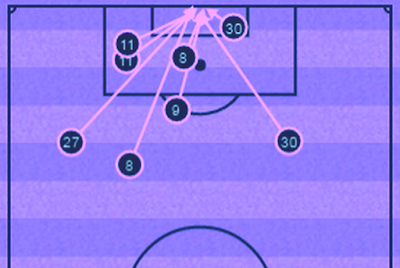 Now that the dust has settled on Wednesday's disappointing FA cup exit, Hammers fans can cooly reflect upon proceedings.

The general consensus is that we underperformed. After a good first 15 minutes, we lost our way, especially in midfield where our lack of pace up front allowed the Manc defence to push up to compress the space that Payet and Lanzini thrive upon. Diafra, please get 'well' soon!

As such, it was not until the final quarter when Man U retreated that we created chances - and boy, there were plenty! As the stars reveal we ultimately created twice as many shooting chances as the Devils with a whopping 9 shots on target!!! On a wider note, under Bilic we always have hope - even at 2 goals down with 15 minutes left!

But it was that man De Gea who prevailed with a series of stunning saves shown in the figure above. For me, the save with his foot from a close range shot from Michail Antonio was suspiciously spectacular and undoubtedly must raise the unsavoury issue of 'magnet abuse' in Premiership football.

The good news is that our science department at VERYWESTHAM are looking into this matter and expect to locate where LVG placed the magnets before the semi-final with Everton.

Unfortunately, even if they are successful and Man Utd are ejected from the competition, our Religion and Witchcraft department still have no idea which Voodoo God Romelu Lukaku is using to persecute our team.