Yes indeed, just as verywestham called it, Big Sam’s lads forced a robust and predominantly aerial encounter upon the delicate visitors to good effect and could have won by a considerably greater amount than the 1-0 scoreline suggested. What perhaps we did not predict was the innovative use of sport fusion to achieve this goal – with Big Sam obviously inspired by the footage of international rugby stars preparing for the annual six nations championship 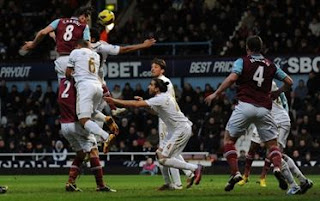 It is thought that Big Sam arranged for special ‘secret’ training sessions to practice lineout-style jumping as evidenced by Andy Carroll’s spectacular ascent for the Hammer’s crucial winning goal. After scrutinising the Association Football rulebook, Big Sam concluded that hoisting of players to enhance their aerial reach is legal and hence the images of Joey O’Brien giving Carroll a helpful push upwards to totally outjump all challengers.

Lineout problems for the Welsh were not confined to Upton Park, as elsewhere the  National team took a thumping in Cardiff against a rampant Irish side. It seems that over a century and a half after the split between Association Football and Rugby Union, the two codes are finally finding common ground. Young Simon Zebo used his six nations debut at the Millenium Stadium to demonstrate some ‘borrowed’ skills from soccer with a sensational heel flick to hold possession in one of the standout moments of individual skill in world rugby of recent times!

Meanwhile, Yesterday’s fixture also provided Hammers fans with an opportunity to view new defensive signing Emmanuel Pogatetz. The Hammers defensive coaching team were said to be engrossed as he recounted tales of how when playing for Middlesborough that he managed to stop Kevin Davies scoring – something no Hammers defence has ever managed to achieve when faced with physically robust but technically very limited ‘striker’

However, his arrival at the East London club has already provoked controversy with the original Hammer’s mad dog, Martin Allen, issuing a crazy canine fatwah against the Austrian Stopper. In a terrifying demonstration of his untamed craziness, Allen is said to have stormed into Upton Park looking to confront the insane pretender. In even more worrying developments, a Tomas Repka ‘intervention’ is rumoured to be imminent as he seeks to assert his position as the most mad Hammer of all time, a title that is supported by the world record 17 red cards he has racked up during his career!

With this new trend for top class soccer tacticians to use rugby techniques , experts have speculated that the next stop will almost certainly be American football! This could see a return to the Boleyn of Benni ‘BigSlice’ McCarthy who could do a useful shift in the style of 1980s American Football legend, William Perry AKA ‘The Fridge’ 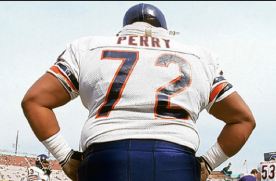 Speaking of which, good luck to the 49ers in tonights Superbowl!
Posted by Verywestham at 14:47