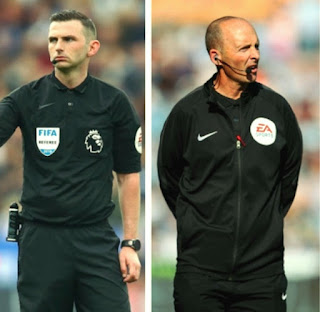 Arghhhh! We're back and full of hope for the season ahead. Watching the amusing scenes at Ye Olde Trafford as Brighton are two up, the failure of the ref to award a stone cold penalty for a blatant push on Danny Welbeck has reminded us that our referees lack the precision of most other elements of Premiership footie.

And with the school of diving excellence AKA Man City coming to the London Stadium you'd have to worry about the match officials for the Hammers opener. Michael Oliver tends to favour the bigger clubs while on VAR is the remarkable Mike Dean!

Deano has retired as a ref but its a measure of the contempt for reason at the FA that he has been kept on in his new role. His calamity list is almost endless but perhaps what provokes fans ire even more is his remarkable capacity to make games all about himself. Just how he might manage that in his new capacity awaits to be seen.

Teamsheets are imminent and the atmosphere is building at the London Stadium. Time to open a new bottle of valium for the season ahead!