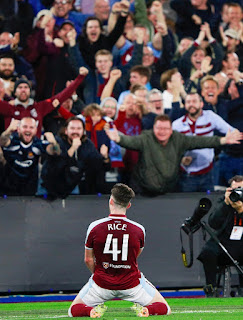 Another great European night for the Hammers as they continued with a perfect start to top their group in the Europa League. Moys put out a mixed side giving some rest to key players like Oggy, Soucek and Coufal. The Hammers ran out 2-0 winners in a tense affair.

Here are our player ratings:

Alphonse Areola (GK) - 8/10 - A quiet night but looked composed throughout and his distribution was good. Some useful game time.

Ben Johnson (RB) - 9/10 - His best game for the Hammers ss he played on his preferred right. The penalty shout would have been cruel as he had been composed and lively all night.

Craig Dawson (CB) - 8/10 - Still a useful part of the squad even though Zouma has usurped him. Steady with an imposing presence at set pieces, almost scoring a few times!

Issa Diop (CB) - 8/10 - Took no nonsense from the opposition. Will be Zouma's partner as we move forward and Oggy's age catches up. Should've been given a penalty for a first half dragdown!

Declan Rice (CM) - 9/10 - When you have Rice's engine and tenacity on your side you look like you have an extra man, He hss matured into a real beast of a presence. Even pitched in with a goal!

Andriy Yarmolenko (RW) - 8/10 - Cracking first half to remind us how innately skilful and clever he is. Created the opener and put himself about.

Said Benrahma (LW) - 8.5/10 - Has adjusted to the Premiership kevel and really is a handfull. Deserved his goal at the end to round off a great performance.

Jarrod Bowen (ST) - 8/10 - A real ball of energy and a great asset as an Antonio alternative. Will be annoyed to have missed a golden chance to wrap it up in the closing minutes.

Pablo Fornals (LW) - 8Top player who really brings out the best in our forward unit as he is the ingredient that makes it purr!