It's all a load of balls! 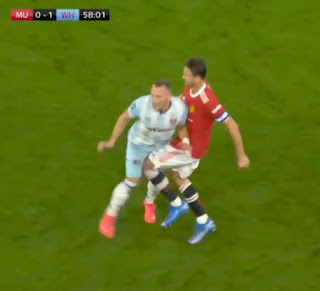 It's been a testicular week for West Ham with back to back league and cup battles with Man United.

Fans have been treated to two zingers as last Sunday's game had everything as the sides went toe to toe, with a late Lingard stunner followed by an astonishing Noble penalty miss rounding off a classic match that you simply couldn't take your eyes off.

Then the B-sides went at it up at Old Trafford as the Hammers second string demonstrated that they can all play the Moyes conterattacking method and grabbing a rare away win at the Red Devil's home.

But the midweek game was marred by an unpunished horror challenge by Nemanja Matic on Vladimir Coufal as her quite simply kneed the Hammers defender in the balls! How such a challenge doesn't receive a severe punishment is beyond any sensible fan. Hiding behind the fact that VAR isn't used in the Carabou cup is total nonsense as it was clearly captured on camera and was entirely deliberate and cynical.

Then David Moyes elected to put Mark Noble's undoubted courage and dedication down to his big big balls!

A strange week but a fair reflection on how far the club has come in terms of competitiveness, organisation, commitment and squad depth.

Happy days but don't put it past the lads to make a balls of Today's visit to Leeds!