Three things we learned from the Elland Road Trip 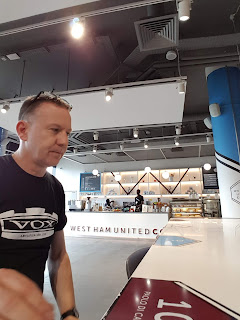 Leeds fans must hate playing West ham as they followed up home and away defeats last season with another loss at home yesterday.

Although it took a last gasp Antonio strike to separate the sides, in reality Moyes system works well against open sides like Leeds.

So poor Leeds drop into the sweaty zone without a win in their six games, whilst the Bubbles boyz lurk with intent on the edge of the top six.

There were some useful insights yesterday about the state of the squad just now;

1. We have a winning mentality. Having fallen behind the Hammers still looked confident and didn't panic. Bielsa did a good job of disrupting the Hammers rapid counterattacking system but we were patient and it payed off. Top sides tends to pinch all three points in nip and tuck games, and so it was yesterday. Gone are the days of moral victories for the Hammers - we tend to get what we deserve and sometimes a bit more.

2. The extra burden of European football, along with a squad of players who are inevitably busy during International breaks, seems to be taking it's toll already. Soucek, for one, looked flat yesterday and maybe needs a rest in midweek. Alex Kral has looked good so far and should make a decent replacement.

3. Kurt Zouma's Premiership experience has allowed him to slot in almost seamlessly. He already looks more than comfortable in the system and playing with Ogbonna. Niko Vlasic, in contrast, needs a settling in period as he hasn't yet developed the understanding that's needed to play in our front four effectively. Time shoukd sort that out.

It's a happy time at the Hammers!