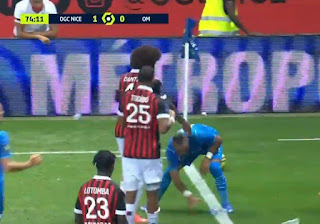 Nice took the lead at the beginning of the second half in a match that was tense on field but boiling over in the stands. As the final quarter began Payet was struck by a bottle as he prepared to take a corner and then proceded to indiscriminatingly fling the missile back into the Nice supporters, sparking an ugly pitch invasion!

Payet's response ignited the stadium and was followed by a full on Donnybrook! As fans, players and coaching staff traded blows the game was called off amidst scenes of total chaos. In one scene, a member of the coaching staff floored an ultra with a wicked right hook!

It's great to have fans back but this was well beyond anything that might be considered acceptable behaviour. For Payet, although he was provoked, his actions will surely see him once again in mighty hot water!

Let's hope folk get home from the game safe and sound as it looked pretty wild as the players left the pitch.