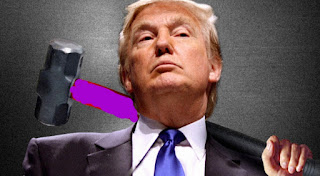 The final day of the US presidency is traditionally punctuated by a raft of pardons decreed by the outgoing premier. Despite the unconventional nature of much of his presidency, Donny 'Big balls' Trump has stuck with tradition and pardoned a host of vagabonds and scoundrels.

All of which is great news for Dimitri Payet, Jermain Defoe and Marko Arnautovic who will no longer need to spend every waking moment fearing the wrath of the Hammers faithful. Meanwhile, Paul Ince has been deemed to have served his time and therefore no longer warrants a pardon.

However, there was no such joy for Frank Lampard who has been cruelly overlooked by Mr Trump. Lamps will have to serve out his time in the shambolic hell that is Stamford Bridge and even worse has recently been assigned a new cellmate in Avram Grant.

The pair of callous perpetrators were forced to endure the harsh punishment of watching Chelsea being hopelessly outclassed by Leicester tonight, prompting some Hammers fans to call for leniency by  the reinstatement of the death penalty as a one off measure for the tormented pair.

Meanwhile, rumours abound that the Hammers have launched an audacious bid for Mason Mount to join his best mate Declan Rice at the London Stadium with sEx-Employee revealing " the lads want Champions League action next season and let's face it that's a lot more likely with West Ham than Chelsea right now"