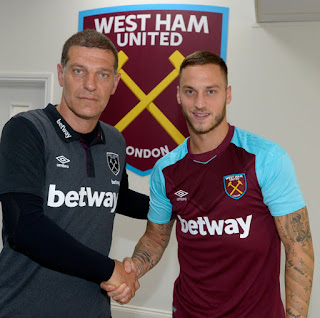 The arrival of Austrian international Marko Arnautovic for a club record £24 million fee is a real signal of intent by West Ham. With Javier Hernandez due to undergo a medical in the coming days. Things look rosy in the Hammers garden!

But already there are uncertainties as to the appropriate nickname for our new talent...should it be 'Arnie' after his famous bodybuilding countryman, which in turn might impinge upon the territory of Hammers legend Julian 'Terminator Dicks? Maybe we could just call him 'Vic' with the readymade Department S chant on offer? Or maybe in anticipation of some of the shenanigans that characterised his earlier career we might follow the tabloids example and call him 'Mad Marko'. Let's hope the latter is not needed.

And then there's the issue of his squad number. Arnautovic prefers the number 10 but that has become owned by Manny Lanzini. Maybe Arnautovic might take number 4 from the departed Havard Nordtveit? Or, given the likelihood that Arnautovic's arrival will hasten the exit of Sofiane Feghouli, maybe he should wait for the number 7 to become vacant?

Or maybe he might bring the number 27 back into the equation? Maybe...