West Ham 1-2 Chelsea: How the Hammers Got it Right and Wrong 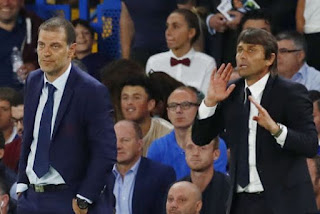 In the end it turned out to be a frustrating evening at the London Stadium as the Hammers seemed to do very little wrong yet were punished for two minor errors by a clinical Chelsea side. There was much to ponder about the performance which had many positives but revealed key problems in the side.
Darren Randolph: Solid. Randy almost matches Adrian for agility shot stopping but wins in terms of presence in the box. Couldn't be blamed for either Chelsea goal and pulled off a few excellent saves - the second half one from Diego Costa was the stand out. 8/10.
Cheikhou Kouyaté: We have been a mess at right back all season. Kouyate is wasted at right back and lacks the defensive positioning nous to cope with clever wingers like Hazard. Feghouli's lack of defensive ability added to the problem. Kouyate's versatility showed as he moved to CB when Reid went off but we need to stop abusing his willingness to play for the team and position him in central midfield. 7/10.
José Fonte: Looked a bit wobbly at times but then again it was Chelsea.  Tends to give the ball to reid to bring it out of defence. The second goal was disappointing for our CBs. 6/10.
Winston Reid: Looked solid all night - let's hope his 'knock' isn't serious as he is our backbone. Will be annoyed with Costa's goal as we rarely concede from set pieces with Reid marshalling the defence. 7/10.
Aaron Cresswell: Looking shaprper with each game but not quite back to his old self. hard to say whether he will maintain his place in the England squad and this performance didn't swing the Jury in either direction! Good to see him getting forward again. 7/10.


Mark  Noble: Getting older but still crafty and uses the ball well. Kante's pace provided a comparison point of what the very best central midfielders do but Nobes kept us ticking over as always . 7/10.
Pedro Obiang: Our best midfielder again. Real energy and his distribution is improving. Maybe a wiser head would have blocked Hazard for Chelsea's opener and taken a yellow for the team. Still developing but has really blossomed and did not look out of place in this company. 8/10.
Manuel Lanzini: Has really taken to the Payet role and was a constant source of inspiration. Could of had a hat trick as he had a series of decent chances . His relationship with Snodgrass is developing with every game. Took his goal well. 9/10.
Sofiane Feghouli: In and out, again. Not good defensively and tends to go too wide and get blocked out down the wings.  The Jury really is out as to whether he is at the required standard but his confidence is better and the remaining ten or so games this season will tell a lot. 7/10.
Andy Carroll: a really positive force and made it through the full 90  mins. Always an option . Will be annoyed at the Costa goal as apart from his attacking prowess. Andy is a major factor when defending set pieces. Please will the footballing Gods let him stay fit! 8/10.
Robert Snodgrass: Good game. He is a real presence around the field and has a tasty touch in attack. His various efforts didn';t quite come off for him last night but a decent showing. Gave the ball away for the Hazard breakaway goal but could justifiably blame Nobes for a poor decision in not crossing the ball into the box. 8/10.


Substitutes:
André Ayew: Decent 25 minutes shift but he has displayed nothing yet to justify his £20 million transfer fee.
Sam Byram: Still finding his feet at Premiership level. He tends to feign to go down the wing and then retreat in field with terrible predictability suggesting that he lacks confidence. 7/10.
Edimilson Fernandes: Great first touch and some more valuable game time. Next season will be a big one for the lad.
Posted by Verywestham at 01:46