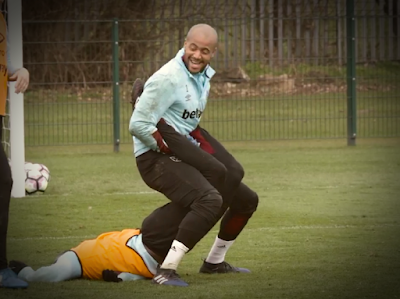 Darren Randolph had to endure a terrible sledging at Bournemouth recently as his goals conceded tally against the Cherries increased to an embarrassing 23 goals in five encounters!

Bournemouth fans treated the visitors to a series of amusing chants, including the pick of the crop "It's happening again" as they mocked the hapless keeper.

Things hardly got any better last week against Leicester as despite dominating the game, the Hammers ran out 2-3 losers having conceded three soft goals. Randolph can claim innocence for two of the goals, but was clearly at fault for the opener.

Hammers famsite Claret n Hugh were prompted to run a poll that has so far found that 70% of fans think Randolph should be dropped in favour of Adrian who has been patiently waiting in the wings.

However, Dazza struck back last night with an assured display for Ireland against a Wales side that included a fully fit Gareth Bale. The Irish claimed a useful point that keeps Wales 4 points behind them at the half way stage in what promises to be a closely fought group that also includes Serbia and Austria.

Randolph looked vonfident behind a makeshift back four and apart from keeping a clean sheet, distributed the ball well as he used his ground skills to provide an extra defender as Ireland frustrated the offensive-minded Welsh.

The game was a physical affair with Wales resorting to some unsavoury tactics in the second half - Taylor being red carded cor a disgraceful leg-breaking challenge on Seamus Coleman. The referee has to take some responsibility for the incident as he bottled giving Bale a red card for a similarly cynical and dangerous challenge on John O Shea just minutes before.

Either way, Dazza sparkled in a performanxe that will undoubtedly boost his confidence.
Posted by Verywestham at 03:05